I Love My Chi may earn a small commission for purchases made after clicking links on this page.  Learn More
Home » Chihuahua Health » Health Issues » Allergies in Dogs: What You Should Know 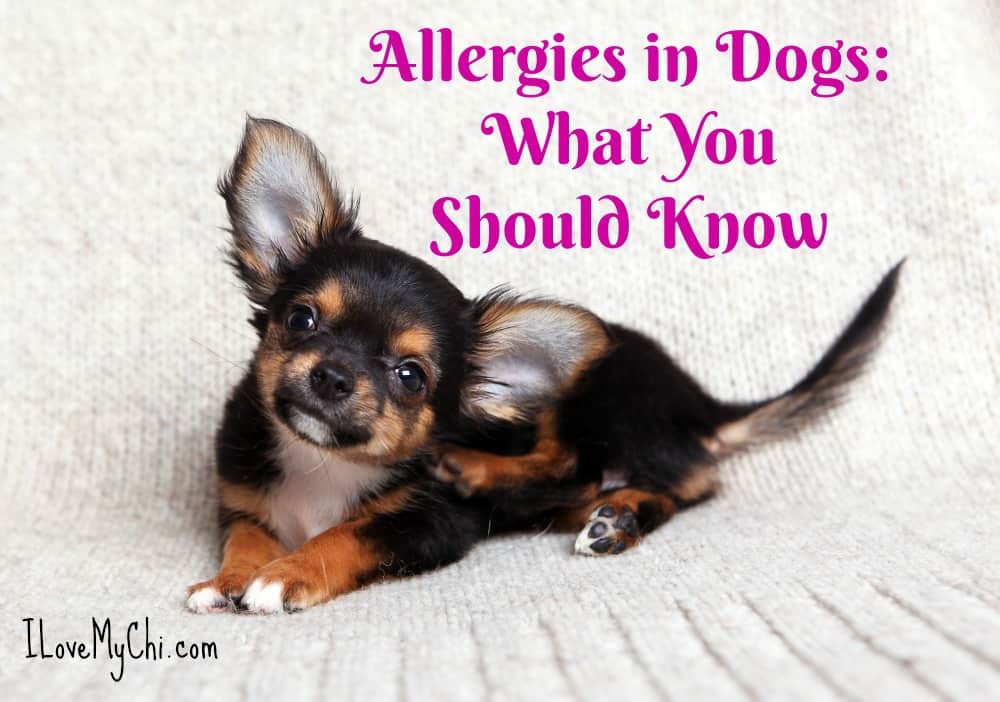 Dog allergies have probably been around for as long as “man’s best friend” has been friendly. But have you ever stopped to think why that is? Well, hopefully, I will be able to shed a bit of light on that subject, as well as what may be done about it.

Allergy research in general, strongly suggests dogs can develop allergies similar to the way people do. Which also means once your dog has developed an allergy there isn’t any way to get rid of it, only treat it. But like with humans, sometimes the allergy will go away on it’s own too.

However, there is “light at the end of the tunnel” for those who have recently adopted a puppy which we will talk more about later. In the meantime, let’s start at the basics.

What Is An Allergy?

In a nutshell, your dog has an allergy when its Immune System permanently mistakes a relatively benign occurrence in its environment (such as kibble, a flea bite or even grass) and mis-labels it as potentially Life Threatening, resulting in your dog’s internal defenses, to go into overdrive often to the detriment of your dog’s health and happiness.

In the human world, for example, if a person is stung by a bee (while not being happy about it) will probably suffer only minor pain and irritation and the incident is usually forgotten in a day or two. However, for those people who have developed an allergy to bee stings, the reaction can be severe enough to have to rush the person to the hospital, and in extreme cases, can cause death.

While death may be rare in the dog world because of an allergic reaction, it still can take a big toll on both the dog and the pet parent.

For example, a normal dog may be bit by a tick and only need to scratch briefly to dislodge the pest with no long lasting effects, while a dog who is allergic may suffer non-stop itching throughout its body requiring immediate medical assistance from the vet.

More info on allergy symptoms can be found here.

So, How Do Dogs Become Allergic?

Believe it or not, much the same as humans do. Your dog’s immune system, which creates the template for all antibodies it uses to fight internal attacks, is the same place where all allergies are created as well.

The “process” of doing this can be a bit complex and beyond the scope of this article and so I will skip the scientific mumbo-jumbo and explain it as follows:

Your dog’s iImmune system has been active since it was born. In essence it is a simple system with the sole purpose of classifying and tagging your dog’s environment as either:

(Okay, it’s a lot more complicated than that, but it’s enough for what we need right now.)

Like in children, the “third tag” is active at birth, but as a general rule, will go dormant as your dog (or child) grows older, making him or her less likely to contract an allergy later on in life.

Unfortunately, for reasons even the scientists aren’t sure of, for many dogs (and children) the “allergic tag” never goes dormant which makes it available for the the Immune System to arbitrarily mis-assign it to environmental things it should never be assigned to. Resulting in the unintentional creation of an allergy.

Which means that well into adulthood, dogs and humans with their “allergy tag” that never went dormant, run  the risk of becoming arbitrarily allergic to anything that enters their environment.

In the case of your dog, the next time they come  across that same substance—the first encounter actually sets up the allergy, while the second encounter triggers it–their body will over react in order to eliminate that substance as quickly as possible. Usually resulting in either vomiting, diarrhea, eye watering, excessive licking and/or scratching, or other things both irritating to your dog and, more than likely, expensive for you to treat. 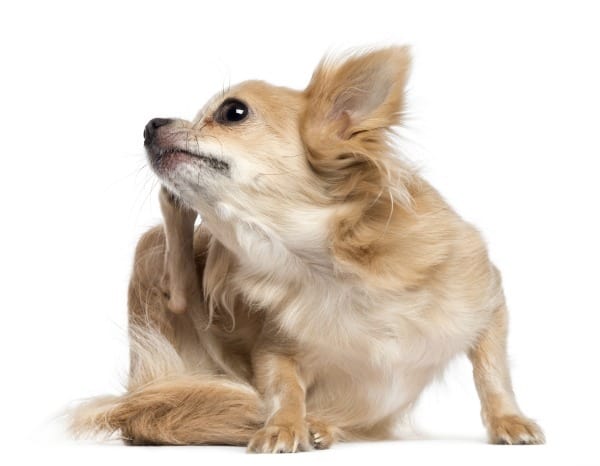 So What Can Be Done?

If your dog presently has developed an allergy, the best thing you can do is follow your vet’s advice which, more than likely, consists of allergy shots, as well as ways of identifying and eliminating those things that are causing your dog’s allergies.

Some of the things you can do to help is to use a hypo-allergenic laundry soap and cleaning products and switch to a grain free limited ingredient dog food. You may need to switch to more natural flea control methods too.

Some people have had good results by spraying their dog’s coat with a half and half mixture of apple cider vinegar and water after their dog comes inside from being outdoors.

You can also bathe them in Ketoseb shampoo (it’s expensive but many vets recommend it) or other allergy shampoos for dogs. After their bath, rubbing Aloe Vera or coconut oil into their skin may help too.

Internally you can give your dog a tiny amount of turmeric. A quarter of a teaspoon with meals is all a chi needs. Turmeric Curcumin has many health benefits for both dogs and people.

In a pinch, if you dog is having a bad reaction, until you can get to the vet, you can give them childrens’ Benadryl (1 mg. per pound of body weight and no more than once every 8 hours). Call your vet to make sure you have their approval first.

If you have a new puppy (especially one of the “toy” breeds like a chihuahua), I want you to take a moment and consider this.

Research has shown that when very young children are overly protected from playing outside, getting dirty, or just giving their bodies time to get used to their environment, they are more likely to develop allergies because the “allergy tag” doesn’t go dormant.

Scientist aren’t sure why this is but it may have something to do with the “allergy tag” not having enough environmental experience telling “friend” from “foe” to go dormant. I equate it to your cell phone having a charge but not a big enough one to keep it on.

I don’t pretend to understand why this is so. All I know is in nature—whether dog or human—we are only allotted a certain time period for our bodies to learn how to properly “construct” the antibodies necessary for life-long protection. It seems that the same thing is true for our furry friends.

Although my research didn’t exactly specify this, I believe “toy” breeds (such as chihuahuas) are at an even greater risk, because, even when they are chronologically adults, their small size can unintentionally lead to over protection by their owners, which may lead to their immune system to possibly malfunctioning causing allergies to develop.

That being said, I highly recommend that while your dog is still a puppy that you do your best to thoroughly acclimate him or her to their environment so that the immune system can truly learn how to adjust itself properly.

Once this is done, you can feel free to pamper your pup as much as you like knowing you can rest assured that their immune system will be able to handle any environmental challenge thrown their way without creating allergies to plague their adult life.