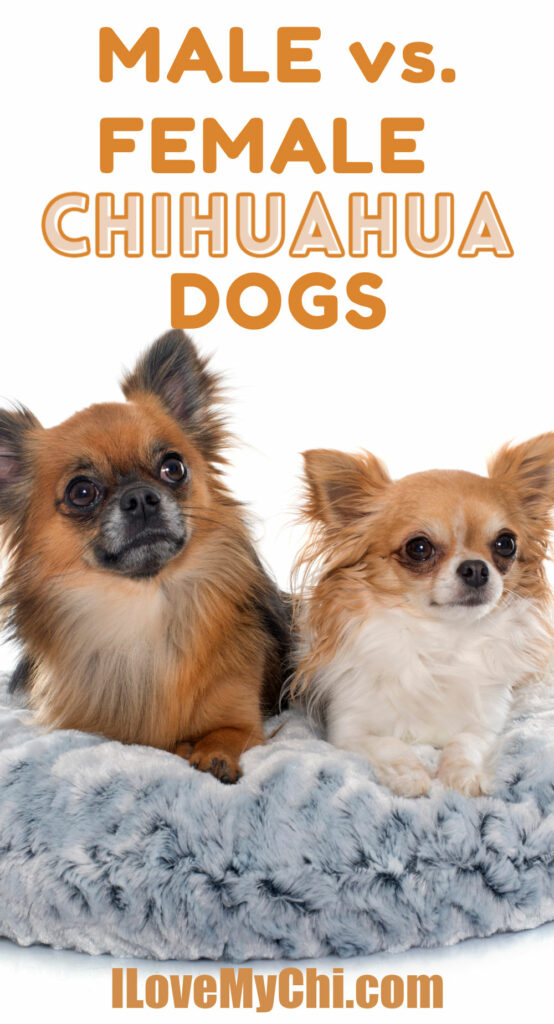 Are you planning on adopting a Chihuahua? You would be surprised at how big of a heart and
personality these tiny dogs can have.

Deciding whether to get a male or a female Chihuahua requires some consideration, though.
While they’re of the same breed, there are some differences between male and female
Chihuahuas.

You’re in the right place if you’re aiming to find out the differences before deciding.

Male Chihuahuas can grow taller and are more affectionate and protective. They’re also
fast learners. Female Chihuahuas are calmer and less aggressive yet a bit more difficult
to train.

Need more info to help you decide which Chihuahua gender is the perfect fit for you and your
family? We’ve got you covered.

Which Chihuahua Gender Should You Get?

Chihuahuas are popular lapdogs and are known to be the smallest dog breed. They’re also
referred to as ‘purse dogs,’ as they can literally fit in your purse.

We can see the charm and excitement in getting one but choosing between a male and a
female can be tricky.

Here are some comparisons to help you decide which gender to get:

It can be hard to tell a male Chihuahua from a female Chihuahua at birth. Since they don’t have
many differences in appearance and size, your best bet is to check their sex organs (Captain Obvious here).

The height difference may not be that much, but every inch counts. As for average weight, both
genders are equal, with around 2-6 pounds.

Chihuahuas are loyal and energetic companions in general. Even so, a dog’s personality is
always subjective depending on how they were raised and treated.

Be that as it may, you can spot distinct differences in traits between the male and the female.

A male Chihuahua’s distinct personalities include:
● Clingier and more affectionate
● Are generally more cheerful
● Can be more sensitive and insecure at times
● Can be equally attached to all family members
● Tends to be more protective

A female Chihuahua’s distinct personalities include:
● Independent and less needy
● Calmer and generally quieter
● Tends to give priority to one person only (in most cases, the owner)
● Can be indifferent to other family members
● Reacts less aggressively to strangers

Remember that these traits are subjective and may not always be accurate every time. Dogs are individuals. How you raise your dog still plays the biggest role in developing their personality. And just like humans, some chihuahuas have different personality traits than others.

Training your Chihuahua on behaving and interacting with others goes a long way. It’s a vital
part of a dog’s growth that all breeds should have access to.

As much as Chihuahuas are known as the smallest breed, they tend to act like big dogs. This
makes training all the more important to keep them from getting hurt.

Male Chihuahuas are more clingy and cheerful. As such, they might mistake training for
playtime with their owners.

The male Chihuahua’s playfulness might also cause them to get more distracted. Training them
might require a bit more patience.

Female Chihuahuas can be easier to train since they can focus better and get less distracted.
They take the cake when it comes to focusing on a task.

They also don’t get as motivated as male Chihuahuas. Encouraging them with treats or petting
may not be as effective.

Male Chihuahuas are a bit slow on emotional maturity, though. This is likely rooted in them
being more playful than female Chihuahuas.

As with other breeds, you should have your male Chihuahuas wait until they are a year old to mate and 2 years old for a female.

But they are able to mate at a much younger age. They can reproduce as young as 6 to 9 months so to avoid any accidents, do be aware of this. female puppy getting pregnant ay such a young age could be detrimental to her health.

When it comes to health issues, both genders of the Chihuahua are equal. The only thing that
could likely set them apart is gender-based health issues such as:
● Cryptorchidism (male)
● Prostate cancer (male)
● Mammary cancer (female)
● Heat-related discharge (female)
● Hormonal-related shedding (female)

You’re likely to encounter these issues with unneutered and unspayed Chihuahuas. You may
want to discuss neutering or spaying with your vet and decide at what age would it be appropriate to have it done.

Breed-related issues are also worth watching out for, as both genders can have them. Common
health issues for Chihuahuas include:
● Patella luxation
● Tracheal collapse
● Stomach illnesses (due to sensitive stomachs)
● Epilepsy and seizure
● Dental problems
● Heart disease

Chihuahuas are generally healthy dogs, but there’s no reason to slack off in supervision.
Remember that prevention is always better than cure!

Chihuahuas have always been known as tiny dogs with huge personalities, and there’s a good
reason for that.

There’s no real winner between the two genders, as both are equally adorable. It all depends on
your preference. If you’re still undecided, just trust your instincts!

I’m an avid dog lover and I’ve had many dogs throughout my life. When I rescued my first Chihuahua, I was hooked on the breed.

I have had dogs all my life and have trained as a dog groomer. I also have been a kennel worker, worked in a pet hotel through PetSmart, and still am a pet sitter.

Read my full bio on my About page