I Love My Chi may earn a small commission for purchases made after clicking links on this page.  Learn More
Home » Chihuahua Stories » The Story of Barney 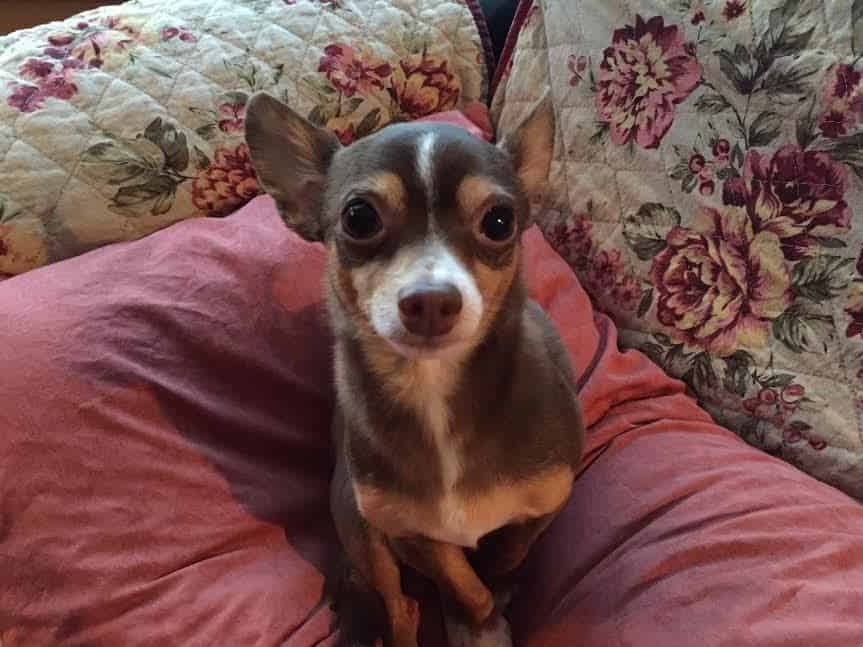 “My name is Barney. I am, of course, a Chihuahua (the best breed, in my humble opinion.) I was born about five years ago in Florida; to this day I love hot weather–can’t get enough of it.”

“My roommates (all 108 of them) were as confused as I was. What was going on? The people were nice, and they seemed very concerned about us. Well, there wasn’t much water, that’s true. There was a bag of food open in the middle of the trailer, so that was okay, although there were lots of bugs and mice around it. Actually, there was also that big hole in the floor of the trailer, but that’s just because it was our favorite place to pee. The people acted like this was very unusual.”

“Being a sociable fellow, I was happy when one of the volunteers picked me up and rushed me outside. Whew! The air was so much better out here! The first thing she did was give me a big bowl of water and let me sit in her lap. My dream come true! I don’t remember ever being what I have since learned is called “petted” before, but I was a big fan. I was put in a carrier and took my very first car ride!”

“The place they took me was what they call a no-kill shelter. I got a bath and had some of my flea-bites treated by the nice lady they called “Doctor”. Some of my dog friends were with me, but there were only four of us in a huge room. What a luxury! And there was plenty of water, food, and people to pet me and take me for what they called “walks.”

“They started calling me “Goober.” Wow, I never had a name of my own before! I’m not sure what happened to the person who put me and the others in the trailer; I heard something about a court case. I don’t know what that is and I never saw the person again, which suited me fine. So I settled in to live in my new home. One by one, my friends got “‘dopted”. I don’t know what that is, but I didn’t see them again. (As an aside, I was happy when Chachi got ‘dopted, because he and I never saw eye to eye.)”

“A few days after what they called New Year’s Day, a lady came to visit me. It was very cold out, it must have been 60 degrees! So a volunteer came to get me; he tucked me in his sweatshirt and took me to the ‘doption room. A nice lady seemed really happy to meet me. I think she might have been crying; I don’t cry, myself, but I saw some of my rescuers cry, so it seems to be one of those human things.”

“I was really nervous and was trembling. What can I say? I just do that sometimes. The lady held me and I tried to play it cool, but she was actually kissing me on the nose! What??? (I started to like it, I have to admit.) Next thing you know, she put me in her car and drove me all the way to a place called Missouri.”

“I was so nervous, I didn’t pee for almost 30 hours. I didn’t want to mess up her car and cause a hole, but she was worried, I could tell. We stopped at every rest stop between Florida and Missouri, but I wasn’t having any of it.”

“So when we got “home”, as she called it, I went out into the back yard but holy cow! There was cold white stuff on the ground and it made my paws go numb. There was NO WAY I was going to pee on that, so I waited until the lady was in the shower and I peed a lake, right in the house. I was worried the lady would be mad, but she laughed and cleaned it up. She called me “Barney” and told me that it was my new name for a new life.”

“That was a year and a half ago, and life is so good. I have three other Chihuahua buddies whom I like very much. I have ten acres and a pond to explore, although the lady never lets me go unsupervised, because there are things called “coyotes” and “hawks” around. I am clean, I am fed and I am loved.”

“I love my lady so much, I sleep next to her and never let her out of my sight. I’m not too housebroken, but the lady knows that I spent four years going wherever, so she’s very understanding. She has very delicious shoes, and I have a real problem leaving them alone. But even when I chew on them, she doesn’t ever get mad at me.”

“I wish that every Chihuahua could have a happy ending like mine.”