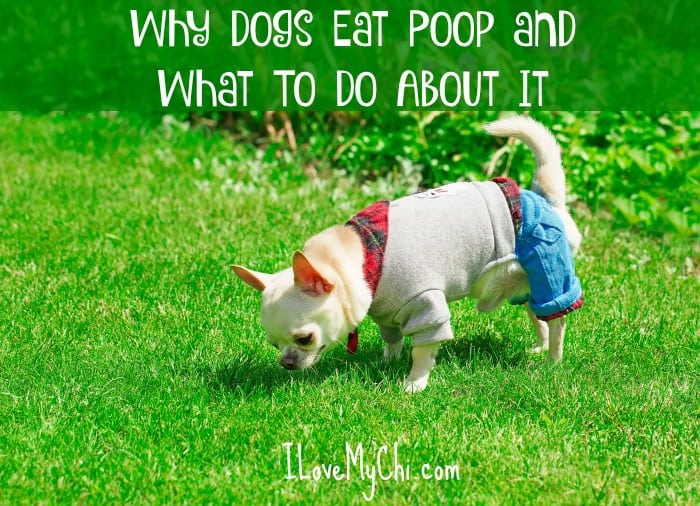 “Why does my dog eat poop?” It’s the age old question. Why do dogs eat something that is so obviously disgusting?

One of my dogs used to eat feces and it would actually make me gag when I’d see her do this. So gross!

Why They Eat Poop

Gross as it is, sometimes they do it simply because they like the taste. Cat poop seems to be especially tasty to them.

It can also be a sign of illness so do mention it to your vet.

One thing for sure, it’s obviously a dog thing and not just a Chihuahua thing.

Should You Let Them Eat Poop?

It isn’t necessarily bad for them and can have a few health benefits. BUT I still wouldn’t let them do it. Not only is it gross and nasty, if the poop eaten has come from an animal with parasites, your dog can get them too. Also, have you ever been kissed by a dog that has “poop breath”? YUCK

How To Stop Dogs From Eating Poop

Sometimes dogs will just stop doing this on their own. Other times it’s a life long battle no matter how hard you try to stop it. Have you won this battle with your dog? What worked for you?

I do the pine apple juice thing been doing it for a month before any change but it works. Many people say no dogs won’t lick it up I just pour a tiny bit on there food daily. I will continue with this cause it works

I'm glad it works for your dogs Patsy. It seems to be hit or miss with it. Works for some, not for others.

Sounds like they are fighting to be the Alpha dog. You may need a dog behavior trainer to help you.

My oldest still eats poo,but the other two,I have caught them licking up pee also :-(

Ugh, pee too? Don't think I have seen that before.

My dog stop eating his poop for a while with some pills the vet send him, but when I stop giving him the pills he began again, he especially likes cat poop or horse poop even more, what can I do? I give him Royal canin so I dont think he's lacking nutrients! ???

Can you put him back on the pills the vet gave you? If not, try the Forbid or the Deter supplements mentioned in the article and see if that helps. You can find it at your local pet store or if you click on the links, it will take you to the products on Amazon.

Try it for a week or two then switch back to pineapple.switching back and forth will keep their poop from tasting good again.

Let us know if it works for your chi Shirley.