How I Got My First Chihuahua 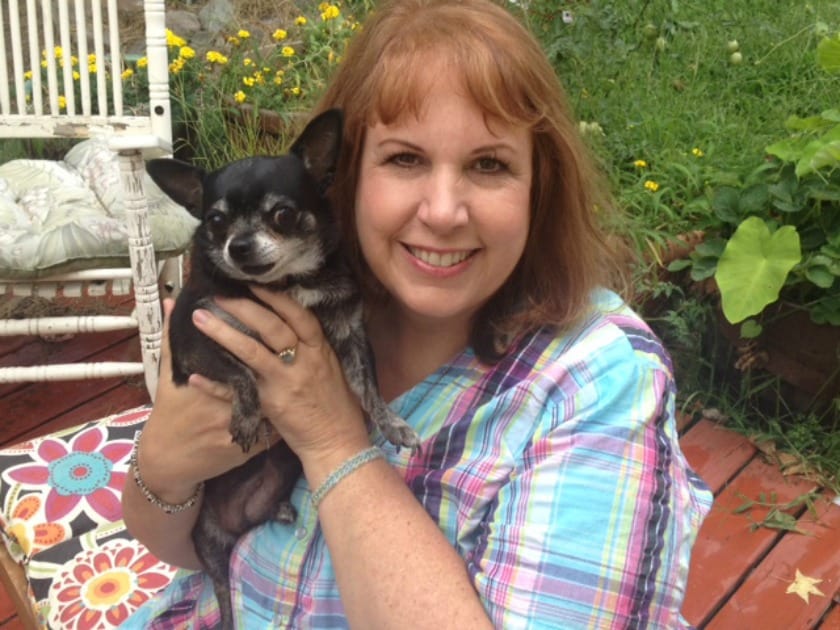 I have always been a dog person. My mother said when I was a baby in my stroller, I would get so excited and squeal whenever we came upon a dog.  I have always had dogs, and most of the time more than one dog.

I grew up with Poodles. I fell in love with Yorkies as a teen and began to show and breed them in the 80’s. After awhile, it seemed rescues and strays came my way so now I mostly own mutts. Except for my Chihuahua Kilo.

I have actually known Kilo since she was a small puppy. My neighbors across the street bought her from a breeder when she was 6 weeks old. I remember wondering if that was a good idea being that they had 5 kids, 3 of who were under 5 years of age. 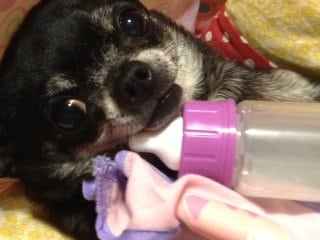 I think I saved Kilo’s life at least a half dozen times the first half of her life. With so many people living in her house, she was always slipping out, either through the door or the backyard gate when someone didn’t close it properly.

Since I work at home and am in my home office during the day, I would sometimes hear a little high pitched bark. When I looked outside, I would see a tiny black dog barking her head off, standing in the middle of the road. Not a good idea on our road where, although the speed limit is 25 MPH, many speed by at about 50. 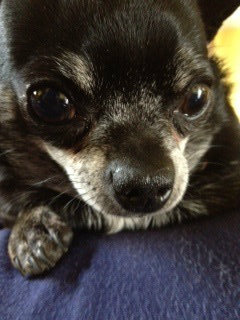 There were times where I had to literally run out in the road with my hands flailing, trying to stop traffic because Kilo was so small and blended in with the color of the road, I knew drivers would never see her there. Then I would take her back to her house or if no one was home, take her to mine until her family came home.

When Kilo was about 6 years old, her family moved away to Kansas and decided they couldn’t take her with them. They gave her to friends who had another small dog (can’t remember the breed). That only lasted a few days until these people brought her to us. They said Kilo and their dog didn’t get a long at all and they were told by our former neighbors to bring her to me if they couldn’t keep her. Huh? No one told me about this. They must have known I was such a softie that I wouldn’t turn her away. And I didn’t.

I was assured that the neighbor’s oldest daughter would be picking her up in a few weeks. I already had 4 dogs at the time and really wasn’t thrilled taking on a fifth. But hey, it was only going to be a few weeks right? Well that few weeks has turned into 6 years. 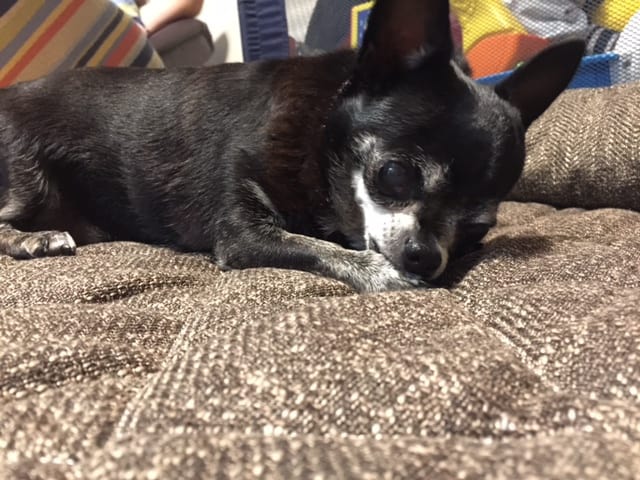 Kilo passed in July 2017 and though I have a new chihuahua and a chi-mix, I still miss her everyday.  Through Kilo, I have fallen in love with the Chihuahua breed and would love to have a few more eventually. There is just something special about these little dogs.

I hope you enjoyed my story. Remember, I’d love to publish your story too about your Chihuahua or Chihuahuas. Email your story and any photos (we need at least one) you want to share along with it to cathy@ilovemychi.com and put Chihuahua Story in the subject line. 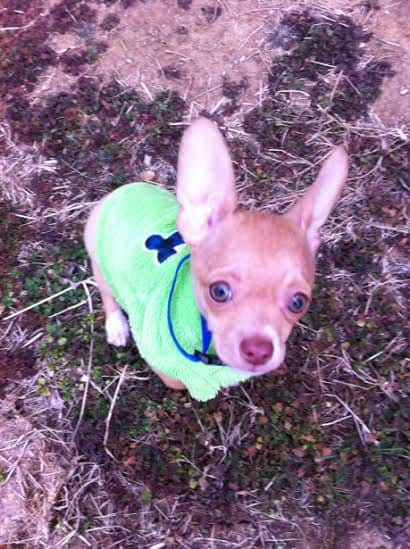 How I got my first Chihuahua. Well to be fair my first was a cute furry Chihuahua Poodle mix, but she insisted she was a Chihuahua with a bad hair day. I was a poodle lover, had a poodle mix from the time I was 23. He passed in 1993. In 1994 I lived with my folks and they did not want another dog in the house. A girl I worked with said she had to get rid of her Poodle Chihuahua mix because her new husband mistreated her. She thought he was hitting her but walked in one day just as he kicked her down the hallway into a wall (while wearing work boots). She said she screamed at him asking why? He said she peed on the floor (he let her out of the crate but no outside, so she peed right by they door after being in that crate for 9 hours). She was frantic, saying she didn't know what else to do. I said I would ask if I could take her. I asked my parents and explained the situation (bear in my I was an adult, but living in their house so... ). My Father said let's meet her and see. The next day my co-worker brought her for a visit. In her arms was the tiniest little poodle looking girl I had ever seen. She had this cutest un-poodle like face, and a chubby little body. My goodness I fell in love. I brought her in to my parents, she quickly sat with my Dad and that was it, he was wrapped around her tiny paw immediately. He said ok she can stay. Valerie said, I will bring her by.. but Dad cut her off and said is it true your husband kicked her down a hallway? She admitted yes, it's true. My Dad said then she stays right now. She does not deserve to be subjected to abuse and you know it. So Valerie left empty handed and quite sad, but knew my Dad was right. Dad had also suggested she take a very close look at her husband and decide if that was really someone she wanted to spend the rest of her life with. And to think over having children with him. (Dad was never afraid of stating the obvious, and necessary... funny neither am I..) Btw she loved Valerie's Dad and that is probably why she trusted my Dad immediately. My brother, on the other hand, worked a few months with me and Brigid teaching her all men aren't horrible. My (now ex husband) continued that lessen as he loves animals too. She liked my ex ok, but totally fell for my current fella. She was 1 year old when I got her and she passed a year and a half ago at 19 years old, I still miss her terrible!! My precious Brigid. My ex got a Chihuahua while we were together and that was when I learned that many of Brigid's traits were really Chihuahua traits. So I said from then on that she was all Chihuahua. My ex kept Mickey (that Chi I spoke of and he is still alive and happy). My hubby and I have 5 chihuahuas right now and love each one of them, 2 came from breeders and 3 are rescues. We also have a mini poodle (rescue), a Bichon (rescue) a Malamute (rescue) and 3 Poodle / Chihuahua mixes (the not so spayed Chi, that I was assured WAS spayed mated with the not so neutered Poodle that I have the paperwork proving he was fixed BY a Massachusetts Humane Society clinic... if you can't trust them.. sigh). She had 7 puppies we found very good homes (with people we know personally) and the other 3 are ours now.. been here too long to say goodbye too. Oh yeah we have a rescue Malamute/Husky who loves her little friends more than anything. And our little boy Poo-Chi idolizes her and we cannot convince him he is not a Malamute/Husky.. oh well.. life goes on... lol

Why a Breeder Chooses to Rescue | I Love My Chihuahua

[…] So as time went on, it seemed dogs in need of rescuing just kept popping up into my life. Some were lost dogs and I helped find their owners. Some were abandoned and I either kept them or found homes for them. It’s been going on this way for the last 20 years. In fact, that’s how I got Kilo, my first Chihuahua and fell in love with this breed. You can read the story of how I got here here: Kilo’s story. […]

Hello! I am the proud Mommy of 2 Chihuahua's who have had my heart from day 1. My 1st was my lil boy Chipper that I purchased at 4months old. He was so tiny he would lay in my palm. I had a hard time getting him to eat or drink in the beginning. I had to practically force feed him. He finally started to eat from the palm of my hand & I used a dropper to get water in him. I was so afraid he was going to have his sugar drop & I wasn't about to let this happen if I could help it. It was a new experience for me but I loved every moment of it. It was like taking care of a baby, my children being grown I didn't mind at all. The lady I bought him from then gave me a lil girl when Chipper was 2yrs of. He wasn't mean to her but they did not bond at all. He wanted nothing to do with her. This was sad to watch so I let a friend take her & she had her forever home. She was happy & so was my Chipper. When Chipper was 3 yrs old the same lady gave me another lil girl. She was about the same age as Chipper was when I got him, she was 4 months old. This is close, it's all written down in their lil diary. She was a lil princess & she & Chipper bonded instantly. It was like they had been together all of their lil life's. I named her Abigail & she goes by Abi after I knew she was in her forever home. They both are still tiny at age 5 Chipper weighs 4lbs & Abi is 3 weighing 3lbs. They are both Mommy babies, the only difference being Chipper is very protective of me & Abi is very protective of Chipper. I recently had to have 7 of Chipper's teeth pulled which breaks my heart. You would never know it, it hasn't affected his eating and he still thinks he is as big & bad as ever. I'm sure Abi will lose some of hers as well. The doctor said this happens more times than not with this small breed. It still breaks my heart but if this is healthier for them that's what is important. I am so glad to have found you and be a part of your newsletter and other Chihuahua mommy's. I love reading about other Chi babies and communications with you. Thank you so much, I am so much looking forward to reading & being a part of your site. I will be sharing photos of both babies at a later time.

I love the chihuahua stories! We adore the breed, as well. My first was Topsy, a tiny, older chi my first husband & I kind of inherited in 1972. Since then, we have had Ginger, who lived to a ripe old age, and right now we have Watson & Max. Watson was a runt, & is very petite. He will soon be 13 years old. Max was a rescue & at about 16 years old, is still a handsome boy. They have been healthy & have given us a lot of entertainment. Watson has chased a doberman out of our yard (yikes!), & has flushed up unsuspecting wild turkeys. His favorite thing is to find a snakeskin, bark at it for an hour or so, then shred it. The great hunter! Max pretty much likes sleeping at this stage in his life, but is still perky at times & loves people. We have taken 'the boys' on camping trips & other travels. They are very portable & are just happy to be with us.

Wonderful story Sandra. I will repost this into it's own blog post for our Chihuahua Stories.