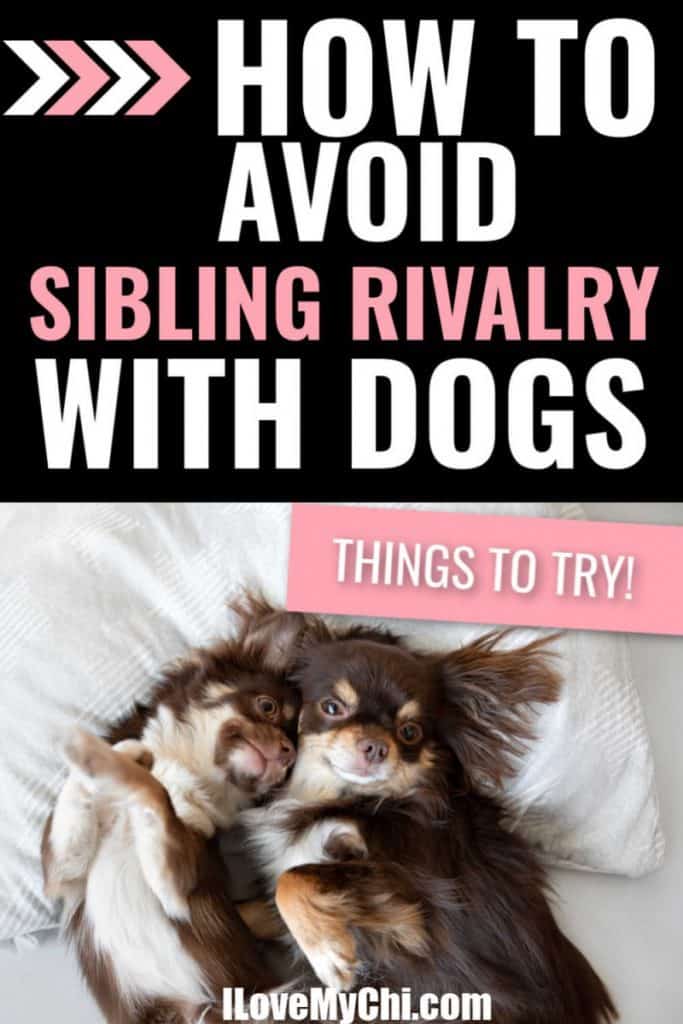 Americans love dogs, which is confirmed by Statista, who found that Americans owned 8.9 million dogs in 2017. Considering what a high number that is, it makes sense that many families have multiple dogs.

While more dogs does mean more fun, and most dogs enjoy the company of other dogs, pack dynamics should be considered to prevent sibling rivalry and keep peace within the pack.

The first thing dog owners need to know about sibling rivalry within packs is the psychology behind it.

Remember that dogs are living creatures with their own needs just like we are. Dogs are very social and need daily mental and physical activity, as well as daily affection and care.

Dogs cannot vocalize when their boundaries are pushed. If they are uncomfortable in a situation, they may either try to escape the situation or they will become aggressive if they feel the need to defend themselves.

If a dog is pushed too far she may bite even if she has never shown any aggression before. Everyone has their limit.

Dogs should not be expected to tolerate every single thing that might happen to them like a teddy bear because they are living creatures.

In our other article, Do Dogs Feel Emotions Like Us?, I discussed how the intelligence of dogs can generally be compared to that of two year old humans.

Consider how two year old humans reason; they see their sibling playing with something and they want to play with it too. Two year olds and dogs do not have the abstract reasoning that adults have.

If you are overwhelmed with what to do about your pack’s dynamics, remember that this similarity makes preventing fights more simple than you may have anticipated.

Focus on finding a solution and try your best to stay calm, as dogs often look to their owners for how to feel, and if you are stressed or upset, it will not positively contribute to the situation.

Causes of Sibling Rivalry Within Packs 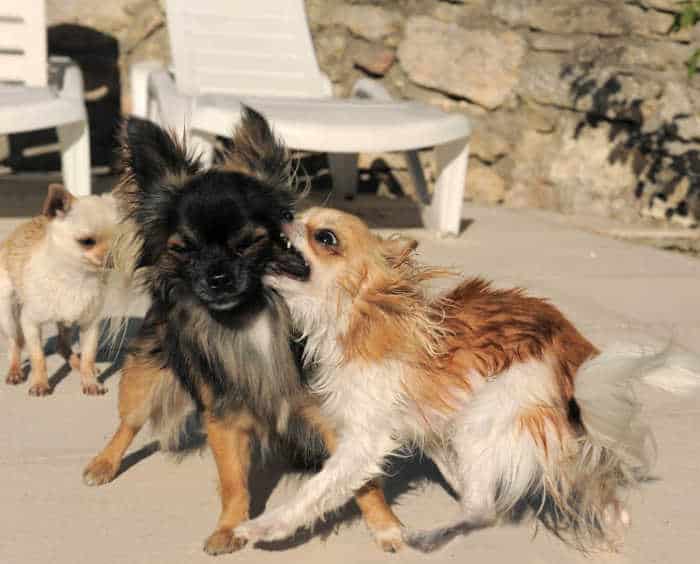 The most common sources of conflict between dogs who live in the same house are:

Similarly to how toddlers want to have complete control over their favorite items, dogs will guard items or resources that they deem to be of theirs. According to the ASPCA, this behavior is called resource guarding.

It is not uncommon for an owner to find a favorite toy or special treat was the cause of a disagreement, and even the owner himself may be the cause.

When assessing an incident and trying to figure out what actually caused the disagreement, think outside the box.

What is valuable in a dog’s mind is not always valuable to us.

For example, one of my friends has a Chihuahua and a Miniature American Shepherd. They once got in a heated fight about who would eat a dried worm they jointly discovered on the sidewalk because they both deemed that snack to be a high value item.

As the pack hierarchy is established, there may be some brawls. Dr. Stanley Coren notes that in 70% of conflicts between dogs in the same pack, the newest addition to the pack is the instigator.

This makes sense because the dogs are establishing the pack order, and a new dog may feel the need to prove himself.

This statistic increases dramatically when introductions are not properly made when dogs first meet.

Bringing home a new dog without doing proper introductions is a risk.

Just like how humans are individuals, so are dogs.

Every dog thinks and reacts differently. Sometimes you encounter another person who is just not your cup of tea.It’s the same with your dog. He may not love the company of a particular dog.

Hopefully eventually they will come to accept each other or at least tolerate each other.

When dogs feel they need to establish a pack hierarchy, conflicts arise. However, there are some things that can be done to prevent these conflicts, such as:

Before bringing any new dog into your house, proper introductions must occur.

Both dogs should be leashed and they should be walked near each other in a neutral space, such as a sidewalk in your neighborhood, or a park rather than the yard of your home, as your dog will deem that as his territory.

If the dogs are happy to see each other or ignore each other, continue allowing them to walk near each other and try to walk them together for about 10 minutes before going home.

When you arrive home, walk both dogs around the perimeter of the yard leashed, and if your yard is fenced and they are still on good terms, then drop the leashes (but keep them on in case you have to separate them quickly) before taking them into the house.

Try to feed, walk, and play with your dogs around the same time everyday. During your dog’s daily nap, try to let him sleep soundly. 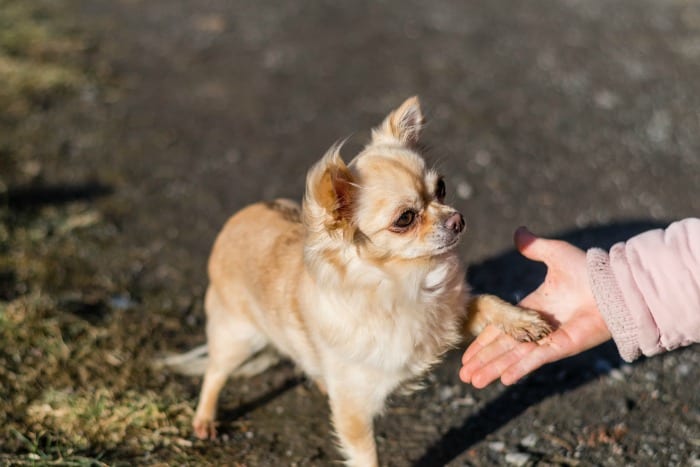 Just like you have to go to work to make money to buy things, make your dog work for good things.

At meal time, make your dog sit or lie down and shake paws before they dig into the feast waiting in their bowl. If your dog wants to play fetch, make him sit and wait before you throw the toy.

By implementing this positive reinforcement training technique at home, your dog will understand what you consider good behavior, and associate it with rewards.

By having to listen to you to get rewards, your dogs will be looking to you as the pack leader, eliminating your dogs’ need to figure out who the alpha is among  themselves.

If you want to reinforce your position as pack leader, always enforce the same rules.

If you make your dog sit and shake before a meal most of time, he will not learn that polite behavior is the new normal. It is not meant to make your dog do tricks for treats; it provides mental stimulation.

Imagine your dog’s typical day for a moment. Wouldn’t you be bored? Boredom can lead to fights and other negative behaviors. Anything you can do to make their brains think is welcome work; it keeps their day interesting.

When you have multiple dogs, treating them equally is of utmost importance.

Be sure to offer affection and rewards to each dog equally. If one dog notices a pack mate receiving preferential treatment, they may attempt to steal a reward from their pack mate, and an altercation will ensue as the “favored” pack mate attempts to guard his reward from his sibling.

Before passing out treats, make all of your dogs sit and wait. When offering affection, try to pet the dogs at the same time.

If you have noticed that your dog resource guards, you have two options:

Just as teenagers like to be in their own rooms, most dogs welcome having their own crate because it is their personal space.

If your dog is still warming up to the idea of a crate, having a special item in the crate can help make it a positive experience. You can keep the door to the crate open.

When you want to treat your dog to their favorite high value item, give each dog the item in their individual crate.

Having the item all to themselves eliminates any need they have to guard it from their pack mates.

However, if your dog guards an item fiercely even from you, exercise caution, because this means their resource guarding is very severe.

If your dogs are becoming increasingly aggressive towards each other, or if you are unsure of the best way to handle the situation, enlist the help of a professional dog trainer sooner rather than later to keep everyone as safe as possible.

A dog does not have to weigh 100 pounds to inflict damage; if a Chihuahua was to bite another Chihuahua in a certain way on the neck, it would be possible for the injury to be fatal.

Even though most Chihuahuas are good with other dogs, disputes may still occur. Often times Chihuahuas guard their owners from other people or other dogs, and they may resource guard high value items too.

Part of owning a dog is ensuring that they are polite and well trained. If something were to happen to you, you want your Chihuahua to be as adoptable as possible.

Rescues may struggle to find homes for multiple dogs, so ensuring that your Chihuahuas are as well behaved as possible could go a long way towards them being able to stay together in their next home.

It is tempting to sweep a negative behavior under the rug instead of dealing with it. With their size, it is not uncommon for some Chihuahua owners to do just that.

Make your mantra, “Would I let a dog who weighed 100 pounds do this?” when your Chihuahua does something bad.

A poorly trained dog adds stress to your life, while a well trained and well behaved dog enriches your life beyond understanding.

When dogs learn what to expect, and what is expected of them, they will feel less of a need to establish a pack hierarchy on their own because they will feel secure under your leadership.

If your dogs are showing extreme aggression to each other or towards you, enlist the assistance of a dog trainer to help you. 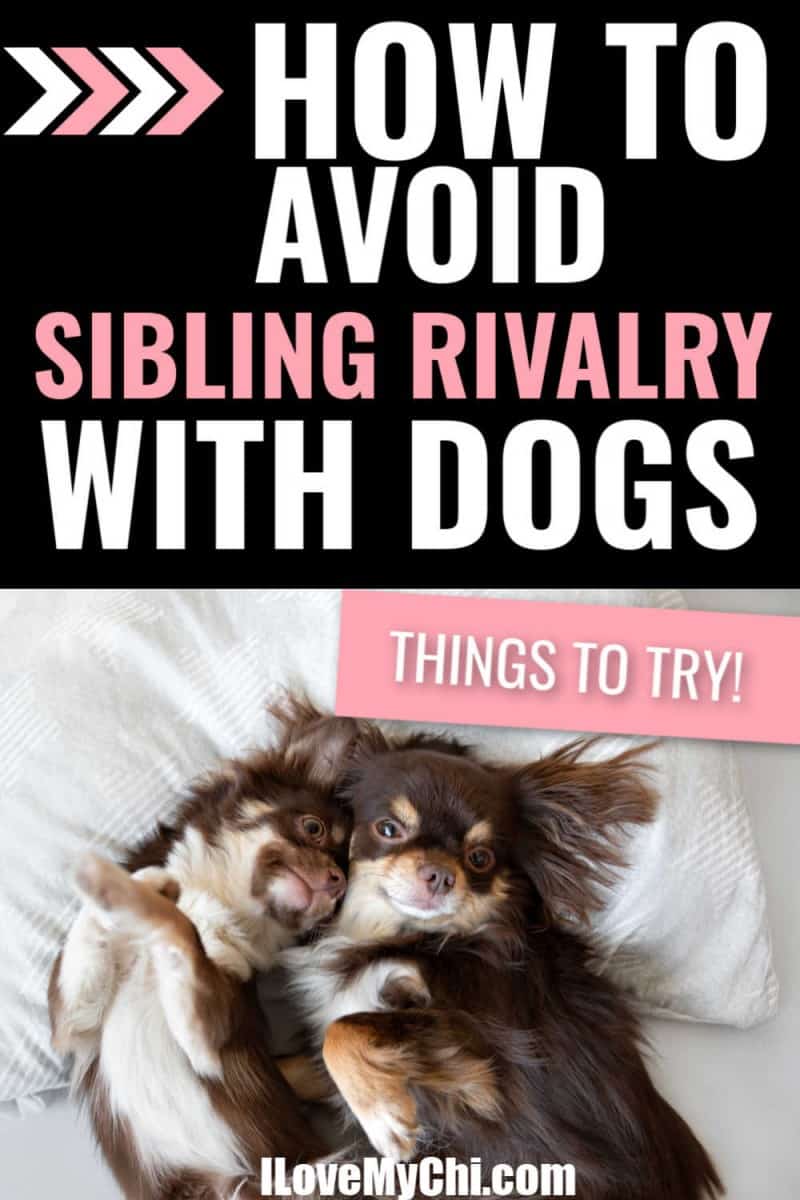