I Love My Chi may earn a small commission for purchases made after clicking links on this page.  Learn More
Home » Chihuahua Training » Chihuahua Behavior » How to Introduce a New Pet to Your Chihuahua

For some Chihuahua owners, their family is complete with one delightful little dog, but for others, the addition of a brand new four-legged family member has the potential to be a fantastic experience for all. Getting through the actual introduction of new pets can be tricky, though – Chihuahuas are notoriously possessive of their owners, and these little Velcro pups may not want to share the limelight with another furry friend!

Once your Chi decides to open welcoming paws to a new family member, however, it can be smooth sailing, and many Chihuahua lovers notice that their petite pups soon become the best of buddies with the new addition (which makes for adorable photo ops too, of course!)

It is important to consider the personality of your current pup before bringing another pet into the picture however, so let’s take a look at how you can manage to get your Chi to mesh with the new addition. 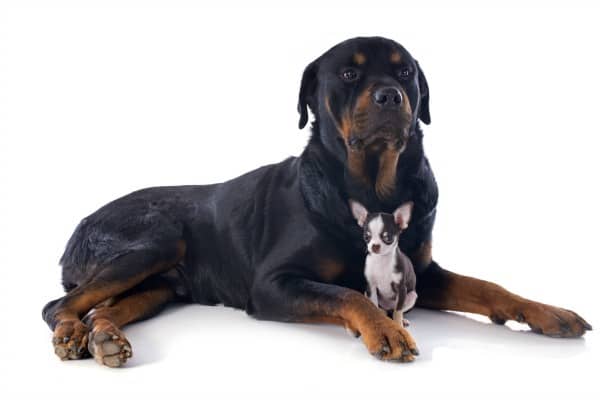 This may seem like a no-brainer, but the first step to bringing in a new canine companion is to first think about how compatible they would be with your own charming Chi. Two young dogs with the same energy level might bond well, but bringing a puppy into a house with a grumpy old pup can be stressful for the senior dog, who may not want to deal with the excited antics of a young whippersnapper wanting to play all the time.

The new dog’s gender might be more important in your decision than you may think. Veterinary behaviorists note that dogs of the opposite sex tend to get along the best, followed by two males together. Surprisingly, female dogs, including Chihuahuas, tend to want to argue the most with other females!

Size is another factor that comes into play here too. A large, exuberant dog just might be too much for your Chihuahua, and even a moment’s unsupervised play could lead to potential injury for your wee pup. Many Chihuahuas enjoy snuggles with larger canine companions, however, so don’t necessarily discount a bigger pooch pal.

Before you actually walk in the door with your new dog, it’s a good idea to have an introduction ‘game plan’. Organize a relaxed meet n’ greet on leash between the two pups on neutral territory, like the park down the street, instead of in your home. Watch their body postures carefully for signs of stress or tension – hackles raised, growling, stiff body posture, lip licking, and avoiding the other dog are all signs that one or both dogs may not be comfortable with the interaction.

Once you actually bring your new dog into the house, make sure that there’s plenty of everything – water, toys, and comfy beds – in different spots to reduce the chance that there’s going to be a fight with your Chihuahua over something. If your Chi is particularly possessive of certain toys or treats, then remove them for at least the first few weeks, and give treats or chew toys separately, in different rooms or crates. It’s also a good idea to feed your new dog in a different place at first, too, so your Chihuahua won’t worry about a new dog stealing their food.

It can be normal, especially at first, for your dog to want to protect the things that are important to him, like a certain sleeping place, or even you! They may try to keep the new arrival from approaching. If you happen to be the center of conflict, get up and move, or distract each pup if they seem to be invading each others space; keep in mind that it will be normal for the occasional disagreement to happen, however.

Don’t punish either pup if this happens, since that could increase animosity between your Chihuahua and the new dog, but instead, distract and remove each of your furry family members to a different room to give them some space. Finally, don’t leave your Chihuahua alone with a new dog until you’re very sure that they’re comfortable with each other and can play without disagreeing. In time, most Chihuahuas can learn to accept their new canine playmates and often become the best of friends. 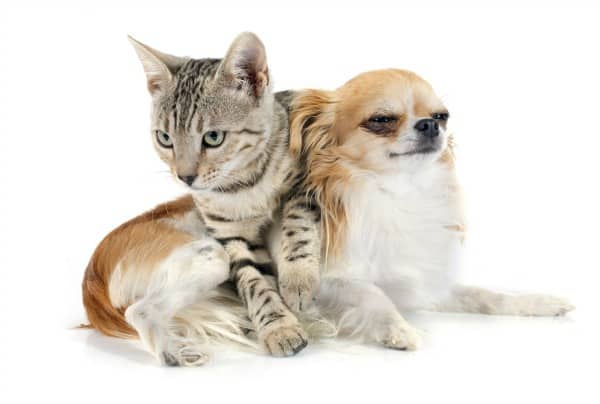 For some Chihuahua owners, the idea of a kitty companion for their pint-sized pup is more appealing instead, and many cats might find that living with a Chihuahua friend is fantastic, too, especially as they’re close to the same size. Because our feline friends are so different from dogs, however, they do need some special treatment to help them become accustomed to a new environment and their new furry family members.

When your new cat first comes home, keep them apart in a separate room for the first few weeks with their own food, water, litter and toys. This way, your charming Chi and the new kitty can get to ‘know’ each others sounds and scents before actually meeting face to face, helping to ease the transition for both of them.

You can also feed both your dog and the new cat on opposite sides of the door, too, creating a positive picture of the other animal in each pet’s mind.

After a few weeks, you can let your cat out for short periods of time under your watchful eye. Keep your Chihuahua on leash as they meet, allowing your cat to approach your pup on their own, and rewarding both of them with tasty treats for calm and relaxed behavior around the other pet.

This is a pretty exciting time for your pup! Calmly remove your Chi from the room if they start to bark or chase their new four-legged family member, however, and they’ll soon learn that a show of bad manners means that they don’t get to interact.

It’s normal for the new cat to growl, hiss or even swat your Chihuahua at first, especially if they’re not accustomed to dogs or your pup seems overly enthusiastic about play. Make sure that your new cat has a separate area for their food, water, litter, and hiding spots for sleeping in that your Chihuahua can’t access, either – this will help your feline family member to feel relaxed and less stressed as they adjust to a new home.

In time, many Chihuahuas and their kitty companions learn to live in peace, and some even become snuggle buddies, too! 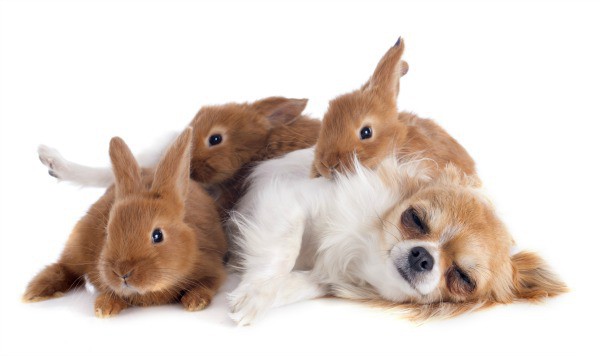 The addition of a bird, lizard or other small pet, like a hamster, rabbit, or guinea pig, can be a whole different ball game for your supervision is always key when your Chi is interacting with these pets, as they might tend to think more of this new animal as a toy or even food!

First, find a safe place for your new pet’s cage or enclosure – a restricted room with ‘no-dog access’ is best, if possible. Even if your pup can’t get into the cage, just being within your dog’s reach can be very stressful or even dangerous for smaller pets. Only allow your Chi into the room when you can be with them all the time.

It might take a little while for your pup to get used to the new sights and sounds that smaller pets or birds may make, and some Chihuahuas can get quite excited about them! If your small pocket pet or bird is out of their enclosure and being handled, keep your Chihuahua on leash for the first few weeks, and ask for (and reward) calm behaviors like sitting or lying down when they’re in the presence of smaller furry or feathered family members to prevent injury from rough play or mouthing by your Chihuahua.

Having multiple pets is definitely fun, and many Chihuahua owners find that their Chis are actually quite accepting of a variety of different creature companions. With time and patience on your part, all family members, whether two-legged or four-legged, fuzzy, scaled or feathered, can learn to live together in harmony.