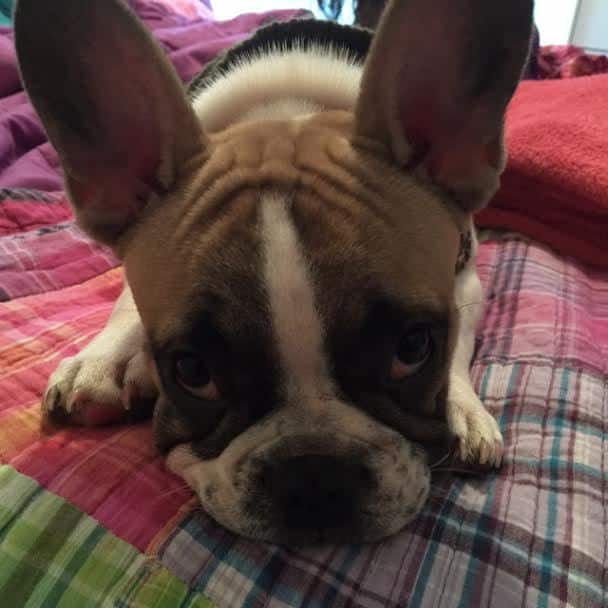 This is my grand dog Odie. He’s an adorable French bulldog puppy.

I always get these guys confused with Boston Terriers. If you want to know the difference, read this: Boston Terrier vs French Bulldog.

He looks innocent doesn’t he? Well don’t let that puppy face fool you. He makes life miserable for my Chihuahua Kilo.

Here’s Kilo feeling sad because Odie is on the bed too: 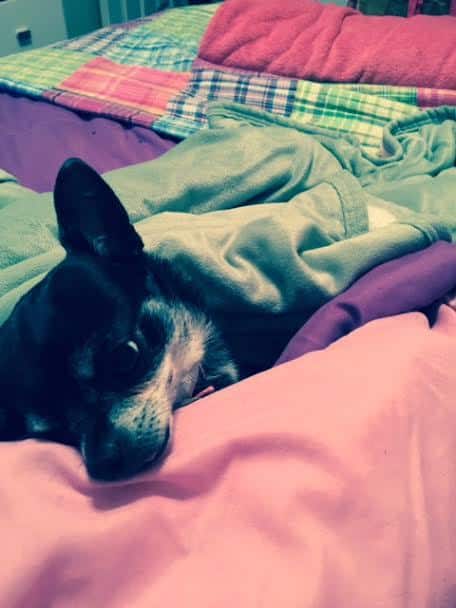 I have 3 dogs total right now.They were all rescue dogs. Kilo is 9 and the smallest. Roxie is the oldest at 10 and is a Border Collie/Lab mix. Buddy is the largest at 85 pounds and is a 7 year old German Shepherd/American Bulldog mix.

All three dogs have their pecking order. Roxy is the most sweet natured dog of the three who loves everyone but would protect you with her life. She’s the Alpha among the dogs though. She’s a fair ruler in her doggy kingdom. As long as you don’t try to take over her kingdom and try to become the alpha (as Kilo is sometimes known to do) she won’t mess with you.

By the way, that brown on her nose was from digging outside. 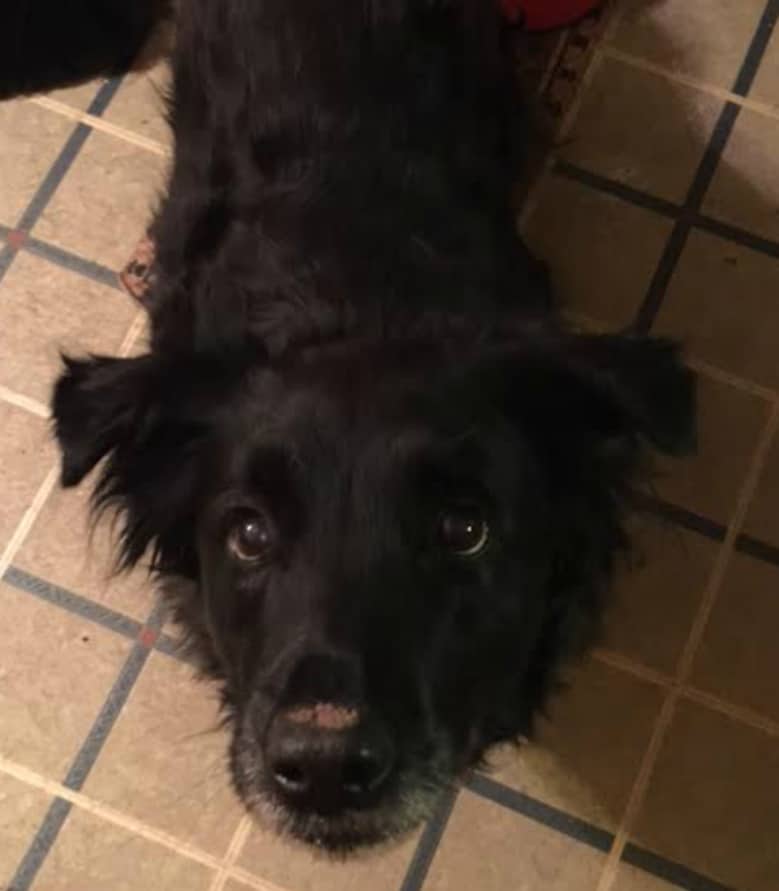 Buddy is the 85 pound wimp. He lets Kilo walk all over them. He’s terrified of people he doesn’t know and if someone broke in, he’d be the one to go hide under the bed and leave it to Roxy and Kilo to deal with the intruder. He does love his family, but he’s just not brave. He looks pretty intimidating though.

In fact, funny story: once when my daughter was trying to sneak into the house and not wake me up, she realized she didn’t have her house key. So she came in through the doggy door you see in the background behind Buddy in the photo below.

Well the dogs thought someone was breaking in. Roxy and Kilo were trying to bite her head off before they realized who it was. Buddy ran and hid under the bed and whimpered. 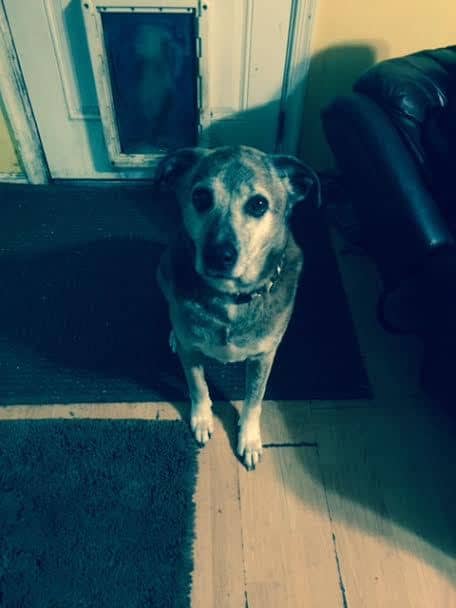 Kilo (who is the inspiration for this blog) thinks she’s as big and as scary looking as Buddy. Typical Chihuahua, right?  She only loves me and tolerates the other family members.

Kilo likes Buddy but she bullies him (and he lets her) by taking his food or toys. She doesn’t like Roxy because she wants to take over and be the Alpha dog. Every once in awhile she will challenge Roxy and Roxy has to put her in her place. I admire how Roxy does this. She doesn’t try to hurt her but she does let her know who’s boss. And Kilo needs this. Otherwise she would become the Alpha and I don’t think her dictatorship would be very pleasant.

Anyway, all 3 dogs get along in their own way. Enter Kilo’s nemesis. 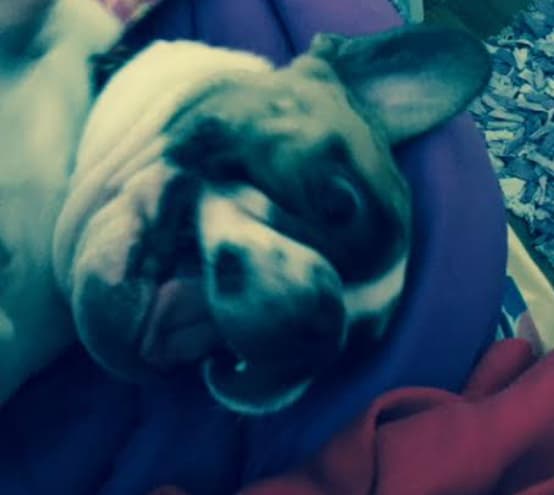 Odie is the newcomer and not my dog. He doesn’t live here but I do dog sit him once or twice a week when his mommy and daddy (my daughter and her husband) are at work all day. His other grandmother (my son-in-law’s mom) also dog sits him a few days a week.

I adore this puppy. He is funny, happy and lively and a real love bug. He loves nothing better than to sit in your lap and give you puppy kisses. He’s not the smartest dog in the world and being a puppy, I have to watch him like a hawk because he is always into something.

If there is a stray pencil somewhere under a piece of furniture, Odie will find it and eat it. He keeps me on my toes. So although I work at home, I find I don’t get much done on the days that Odie is here.

Odie respects the larger dogs and actually plays quite a bit with Roxy. Buddy just ignores him.

Kilo dislikes him intensely and growls at him whenever he gets close to her and Odie finds that fascinating. As soon as he sees her, he pounces on her. I know he just wants to play but he outweighs her by 15 pounds now. He’s a solid, muscular little guy and I’m afraid he’s going to hurt her.

So not only do I spend all day trying to keep Odie out of stuff, I have to try to keep him and Kilo separated. After Odie went home last week, I noticed Kilo was limping, I decided to keep them in separate rooms. So the next time he came over, I kept Kilo in my bedroom with her favorite toys, blanket, food, water and potty pad. I thought she would appreciate the peace and quiet of not having to deal with this rough and tumble little boy.

Instead she cried for several hours until I caved in and let her out. I know she felt like she was being punished and she didn’t deserve it.

So since then, I figured that since Odie is going to be a part of our lives, he needs to learn how to act around Kilo. So when he was over here a few days ago, I let both dogs stay out but as soon as Odie tried to go after Kilo, I would tell him “NO”. If he stopped, I praised him. If he didn’t, I put him in a time out in the bathroom.

He seemed to catch on pretty quickly, but after awhile, he would forget and try to go after Kilo again. So we aren’t there yet, but hopefully with consistent reinforcement, he will learn to leave Kilo alone . In the meantime, I’m not getting much work done, what with being a doggy referee and all.

Any advice for us? Do you think I’m doing the right thing?

By the way, we do have a doggy pen that I usually use out in the backyard when I bring my bunny rabbit Bun-Bun out for some fresh air. I tried using this to put Odie in when he misbehaved, but he just knocked it down. So the bathroom time out seems to be the best option.

Here’s a cute video I took a few days ago of Odie attacking a jump rope tied to the swing set. You don’t see Kilo because I’m holding her but you do see Roxy and Buddy play fighting. Oh and my adorable granddaughter playing!

Thanks for introducing all three of your adorable pups. I'm not surprised that your smallest dog bosses over the others. I see that "little man" syndrome every time I walk my two shepherds. On another note, how did you ever get sooo many LIKES on your FB page? I'd love to know your secret to success.

Well, My Facebook page is getting close to 2 years old so it wasn't overnight success with Facebook. I have a colleague who has over a million in the same time period but he did a lot of advertising).

When the page was new, I joined in the conversations and liked every comment (as long it was positive) and I often featured the fans photos. I still do feature their photos as "Chi of the Day" which I post 6 times a day (you can schedule your posts on FB).

I did do some light Facebook advertising once in awhile, usually I don't spend more than $2 a day on that when I do it. I also make a lot of photos memes and ask questions. All that builds engagement and brings in the fans.

it will be a yr in March that we lost our girl pebbles. We were blessed with her for 12 wonderful yr. she was the child that we never had. I told her her always that when God made her he broke the mold.!!! She was made just for us. There is not a day that does not go by that I don't talk to her ashes. She got sick within 3 wks. Than passed. .. We want to get another chihuahua, but not just yet. I think we will get 2 the nx time. She went to myrtle beach n the jersey shore n Home Depot,lowes. I had a carry bag of her n she sat like a queen in that bag!! She never barked whenever in the store. We told her to be a good girl n not bark.. She listened to whatever we told her... The mold was totally broken... The best breed of them all..

She sounds like a very special little girl Robin!