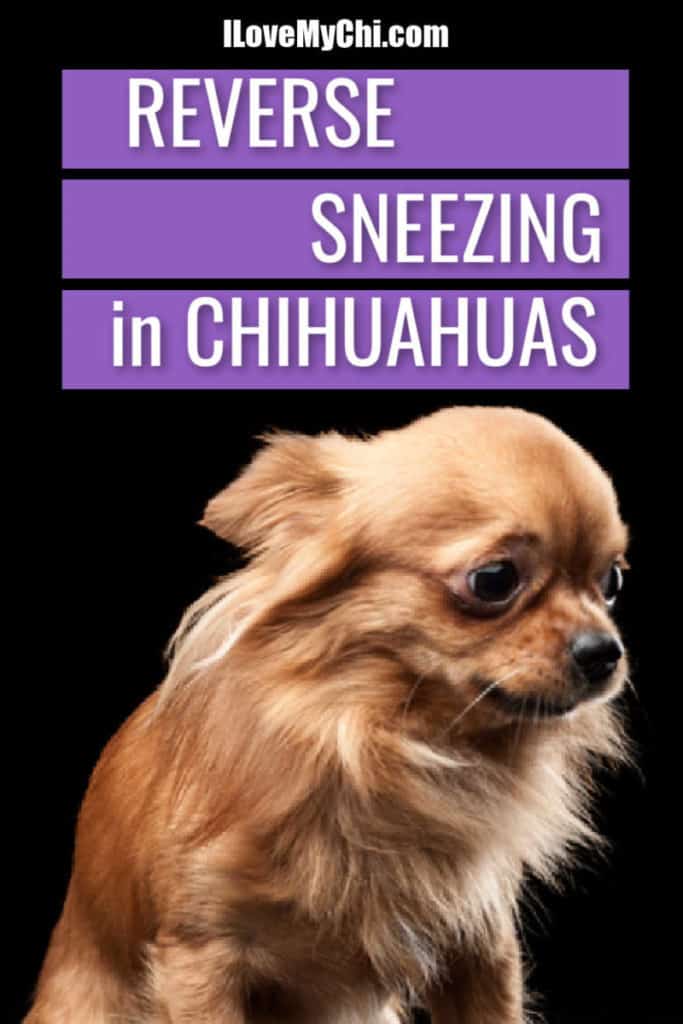 Have you heard of reverse sneezing in Chihuahuas? As dog owners, we often fear for the worst when we hear strange noises from our pets – and Chihuahua parents are no exception. If anything, we can tend to overreact when it comes to the safety of our furry little friends!

Why Does My Chihuahua Snort?

Among the many interesting noise phenomena that our canines are capable of, reverse sneezing is one that’s often a cause for extreme alarm among lovers of these pint-sized pups.

For the most part, though, this behavior is often short-lived and harmless for your friend on four paws, even though it can look and sound like an emergency for your Chi.

It’s a good idea, too, to know the difference between this harmless reflex and more serious respiratory issues like collapsing trachea, another common health problem for Chihuahuas, or Kennel Cough, which is common among all dogs.

What is Reverse Sneezing in Dogs?

When your dog sneezes in their regular manner, the air is pushed out through their nose. With reverse sneezing in dogs, air is pulled in through your pup’s nose instead. It’s essentially a backwards sneeze that makes a very distinct sound.

A Chihuahua reverse sneeze can be head-turning for a pet parent, to say the least!

During an episode of reverse sneezing, dogs will usually breathe in rapidly and stand still with their heads stretched out and their legs apart, making a loud snorting or honking noise that might sound like he’s choking on something. Some owners even describe it as looking and sounding very similar to a cat trying to bring up a hairball!

Generally, episodes of reverse sneezing in Chihuahuas last no more than a minute or two though, with dogs acting normally in between episodes.

Here’s a video that shows a pug doing the reverse sneezing thing and what a Vet has to say about it.

In comparison, tracheal collapse is a condition in which your pup’s trachea partially collapses or flattens out as your Chi is trying to breathe. This particular problem causes irritation to your dog’s airway and results in gagging, coughing, or wheezing symptoms, all of which are quite distinctive and different from reverse sneezing.

When in doubt as to what might be causing your pup to produce odd breathing sounds, take advantage of modern technology and try to record a video of your dog’s behavior for your vet, since this can give them a much clearer picture of the symptoms your canine companion might be experiencing.

The jury is still out on determining the exact cause for reverse sneezing in small dogs, though it seems to serve the purpose of getting rid of irritating nasal intruders like dust, dirt, and pollens. Any breed, age or sex of dog can experience reverse sneezing incidents.

In Chihuahuas, who seem to have a higher incidence of reverse sneezing than many breeds, things like drinking too fast, over-excitement, and use of a collar instead of a harness while walking are all potential triggers.

Canine allergies or inflammation of a dog’s nasal passages can also contribute to the incidence of these episodes.

Should I Worry About Reverse Sneezing?

Most reverse sneezing episodes are completely harmless and your Chihuahua will probably recover problem-free. But there are some occasions that could be cause for concern.

If you find your Chihuahua reverse sneezing a lot, or increasing in frequency, it’s a good idea to get in touch with your veterinarian.

Keep an eye on your pup for other serious signs that could potentially signal a more serious problem such as a viral infection, polyps, nasal mites or even a cancerous growth.

If you suspect your pup is sneezing because of allergies, your vet may be able to discuss giving your dog an antihistamine at certain times of year to decrease your dog’s reactivity to annoying airborne particles.

What Can You Do About Chihuahua Reverse Sneezing?

Although it can be impossible to predict episodes of reverse sneezing in Chihuahuas, there are a few things that you can do to help your pup at the time.

Massaging your Chihuahua’s throat, gently opening their mouth, or blowing on their nose can help to stop the sneezing reflex, as can offering them a small amount of food or water.

If these things don’t help, then briefly and gently pinching your pup’s nostrils closed may help stop the sneezing spasm, too (no more than 3-4 seconds, for example).

I love this video of Dr. Karen Becker explaining reverse sneezing and what to do about it.

Even if your Chihuahua has never experienced an episode of reverse sneezing, it’s never a bad idea to educate yourself about this condition, as these cute little canines do tend to be more prone to a reverse sneezing reflex.

Knowing what to expect and being prepared in advance of an episode allows you to keep calm and help your dog effectively to recover and continue their day happily and stress-free!

And just to make you feel a little more at ease about this condition, I had a wonderful poodle mix (who was a therapy dog for nursing homes and hospitals) who dealt with reverse sneezing throughout his whole life and he lived to be one month shy of his 19th birthday.

Pin this for later!

This article has been fact-checked and approved by Dr. Sara Ochoa DVM. You can read more about her on our About page.

Thank you for this article. My dogs do this and the dog I am fostering does this quite a bit. I am printing your article for the lucky person adopting this sweet baby girl.

I'm so glad you found it helpful Lisa!

Hi my male chihuahua is 3 1/2 years old when he was 2 months old he started having seizures that I found if while he was having the seizure i would rub a little maple syrup on his gums and it would slowly make him stop, then he wouldn’t have another one for a rear and a half later I would do the same thing and he would slowly stop seizing and just be drained so I started him on the CBD oil (Very Little) and it seamed to work for about 2 years and out of the blue started having them a little more often still using the maple syrup and suddenly he just stop eating period I didn’t have a regular vet nor was I working and I didn’t know what to do next so we where on day 5 no food and you couldn’t even touch him because he would scream like something was broken so we rushed him to the closest emergency vet hospital and they did blood work ex rays and did a valley fever test and he tested positive for valley fever and has been on fluconazole since December of last year and was charged $977.00 for a valley fever test and blood work $325.00 and exrays $289.00 he has gotten a little better but his weight has gone from 7 lbs to 11 lbs in 5 month and I have to fight home to get him to eat and I can’t even now get him any kind of pet ins because he has now a preexisting disease and I’m still paying on his last vet visit the good news is I’m working now and paying off the vet bill and I’ve called around to differant vet clinics which I know it’s going cost especially beings I can’t get ins. But also it’s been 5 months since the last test and does he even still need and he also should have his thyroid checked and will need his shots updated so my question is does any one know of a good compassionate vet that cares and truly loves animals and that won’t nickel and dime me to death and to be a caring loving good vet to my fur baby my # is 602-754-0645 my name is Patricia Spencer-Clark P.S. Also if anybody knows where I can take a class on valley fever after your dog has been diagnosed and what I can do to help him get better and what to watch for while he is going thru the treatment with fluconazole

Wow, Patricia, you have really gone through a lot with your fur baby! I know nothing about valley fever so can't help you there. Good vets are hard to find. Do you have Nextdoor in your area? If so, ask on there. Also if you have any veterinary colleges in there, check with them. They need patients and will often offer their services at a reduced rate.

When my dog he reverse sneezing I pick him up and blow in his face and usually that stops it!

Interesting. It's worth a try. My Ziggy seems to have developed occasional reverse sneezing. I'll try it next time he gets a coughing spell.

Rita I have a post on tracheal collapse that has 2 videos. One with a dog with reverse sneezing and the other with tracheal collapse so you can hear the difference. https://ilovemychi.com/tracheal-collapse-in-chihuahuas/