I Love My Chi may earn a small commission for purchases made after clicking links on this page.  Learn More
Home » Chihuahua Health » Health Issues » Tracheal Collapse in Chihuahuas 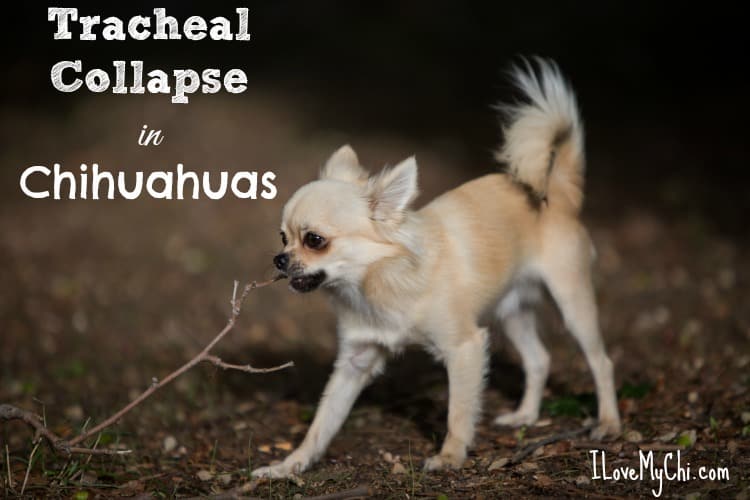 One of the biggest issues we hear from Chihuahua owners is wondering why their dog keeps coughing. Most likely it’s reverse sneezing which is very common in Chihuahuas. It could also be Kennel Cough which is highly contagious. But it may be a more serious issue called Tracheal Collapse.

This condition is common in many small dogs, including Chihuahuas.

Dogs with tracheal collapse have tracheas that are not shaped the way they should be. They flatten which causes the dog to struggle to get enough air.

The dog may be born with this defect or they can develop it later on. Some of the things that cause it are:

Tracheal Collapse most often is described as sounding like a “goose honk”. If your dog starts doing this when exercising or excited, while eating or drinking, they may have a collapsed trachea. Their gums may get a bluish tinge to them.

It’s important that your dog get treated if he has this condition because it will get progressively worse without treatment. Treatments for tracheal collapse include:

It’s often difficult to know whether your dog’s coughing is caused by tracheal collapse or the less severe reverse sneezing. The symptoms are very similar.

If your dog coughs when excited or after eating or drinking, or turns her elbows outward and extends her neck and gasps inward with a rhythmic snork snork  snork , this is reverse sneezing.

If she breathes with a raspy sound, or coughs reflexively when you simply rub her throat, she could have a collapsing trachea.

Also if she coughs with one or two expulsive outward bursts, typically with a gag or empty retch at the end, she could have a collapsing trachea.

Here’s an example of a Chi with reverse sneezing:

and here is a Chi with tracheal collapse:

They sound very similar don’t they? The best way to know for sure is to get your Vet to check your dog.

If you’d like to learn more about this condition, this is the best video I have seen that explains it:

Has your Chihuahua been diagnosed with tracheal collapse? Do you suspect they may have it?  I’d love to know about your experience.