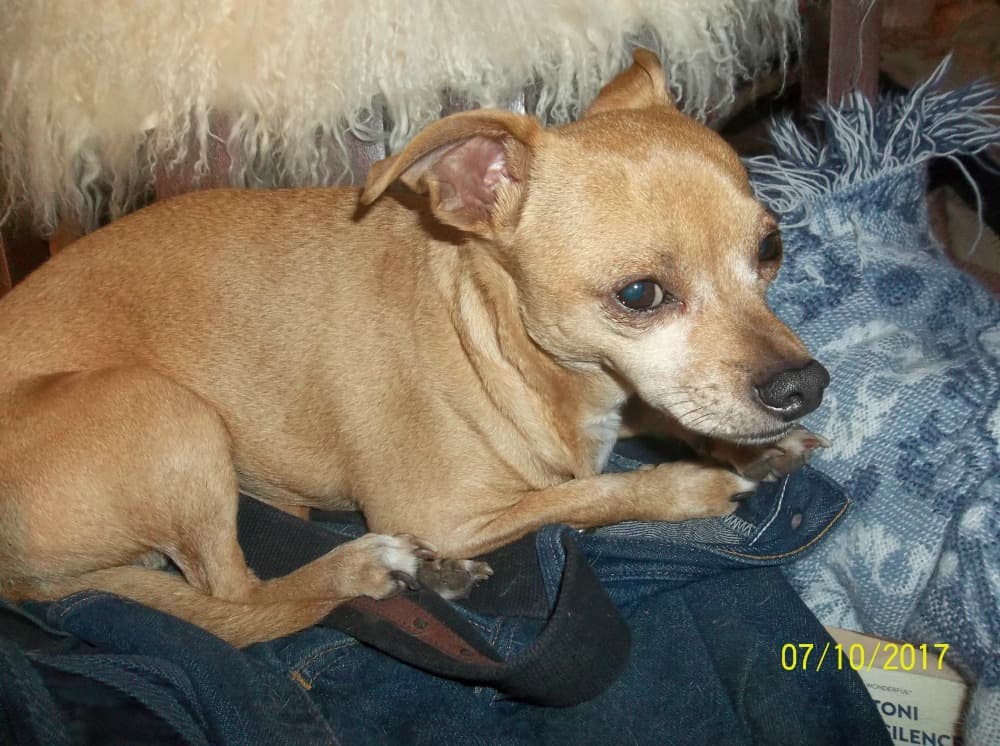 My little Charlie guy got to be mine at the San Pedro, CA pound on Christmas eve when he was just a baby.  He was clearly taken from his mama too early. I got Charlie in 2009 I believe, so he is getting up there in age, but he is still my baby.

I had gone there to take the pound newspapers and old towels for the pets, but the staff were in the back, probably having a Christmas party.

A lady came in and it was terribly cold outside.  She was holding this little fellow and he was shivering like crazy.  She asked me if I would hold him and so I put my papers, etc. on the counter and took him.  I stood waiting for her to come back but she did not and neither did the staff come out front.

So I went to my car with the little fellow, and asked my other dogs who came along if it was OK if we took him home with us.  There was no way we were going to leave him there on Christmas eve.  So of course my pets said yes because all my pets always know another sister or brother might be joining us at any time.  So home we all went and Charlie, tiny as he was, snuggled happily in bed with me and the others.

At that time, he was my first Chihuahua.  He had severe separation anxiety, and when I would have to leave to go to work, he would destroy anything that was mine, and I don’t know how he knew which ones I treasured, but he did.

But I quickly got his number and so I would never come home without a “new toy” I would stop and get at the thrift store for him. And I would have it in a bag, and tell him when I walked in, “Charlie, it’s your NEW toy!” (always said with an emphasis on NEW!)

Well, he gradually got over the anxiety, for the others took care of their baby brother.  I had three other dogs at the time, two schnauzers, and a shih tziu, and I think two cats.  This was years ago and I am 76, so forgive me if I have difficulty remembering all of them.  Every single dog lived with me until it passed on, either of illness or just old age.

You know, he got lost up in Big Bear when I was doing appraisals for the day there, and staying with some good folks.  The night before we had heard a coyote near the cabin.

While I was at the quilt show doing appraisals, the man of the house took Charlie for a walk on a leash with a harness that was not fastened tight enough.  Charlie was fine on the walk, but when they went back to the car, Charlie started to freak out as he didn’t recognize the car, and so he got loose and ran fast away.

The man called to tell me what happened, and as soon as I was able, I set out with them to search for him in the area where he got loose.  It was approaching sundown and I was just frantic, remembering the coyote in the general area.  I kept going back to the park, and the last time I went there, the ranger there told me that a lady had told him she had seen a little dog running around a mobile home park near the lake.

The man and I went together in the car and began to drive through there.  I spotted Charlie trying desperately to recognize his home out of those in the park, running from one to the other.  I got out of the car and sat down in the grass by the mobile home that was closest to him.

As I put my hand down in the grass, I felt a tennis ball, and so I picked it up, and in my voice that he always looked forward to, I called out, “Charlie, It’s your NEW toy!”  That did the trick and he came shaking and wagging his tail and looking for his toy, and I gathered him up in my arms.

We went back to the nice people’s house and they felt terrible that the dog had gotten loose, but I understood and so after dinner, Charlie and I got into my car and headed for home.

We never went back to that area again, but I still think about my smart little fellow remembering that he lived in a mobile home, and trying to find one that looked familiar.

To this day, I look at him and shiver thinking about that nightmare.

I know we all love our Chihuahuas, so please remember all the others as well as many other lonesome, afraid, or just plain without hope creatures in the pounds and take something for them too.

I look at all their sweet little faces, and some are so afraid, while others look as though they have lost hope, and then some are so hopeful of having arrived where someone will love them.

Please don’t forget the little ones in the pound.  They put them to sleep very quickly.  In the San Bernardino pound, they only keep them normally for four days; horrible for the poor babies.  They are all so darling.

We are always rescuing some animal so we ended up with our tribe of five Chihuahuas, and two cats.  I subscribe to see adoptable animals at the pounds because I will try to find people looking for a pet, and also it reminds me how lucky our own babies are when I see how many Chihuahuas there are in the pound.

If you cannot adopt (I know we cannot afford to adopt another one and we already have more than our limit, but we will tell folks one is our foster child), at least take them things like blankets, towels, baby T-shirts (newborn ones work well), newspapers, bags of dry food, or other items of care such as toys.  Or just go and visit them.  I have rescued so many animals in my lifetime, and I don’t regret a single one of them.

Peace and many blessings to all of you and yours,  Anne and Richard always, as well as Charlie, Mama, Brownie, Dolly, and Yukon Jack (Our Chihuahua family) as well as Mousafa cat and Yao Yao cat, three goldfish and two catfish.

I loved the heart warming story about Charlie! I have 2 chi mixes from an accidental litter. Wish I lived in a large house with a big ol yard. I would love to have more or at least foster several a year. I wouldn’t take a million dollars for my sweet, healthy, spayed and neutered pair of puppy angels. My first Chi’s ever. Almost 3 yrs old now.

I would love to have more too Jane. But 4 is my limit.