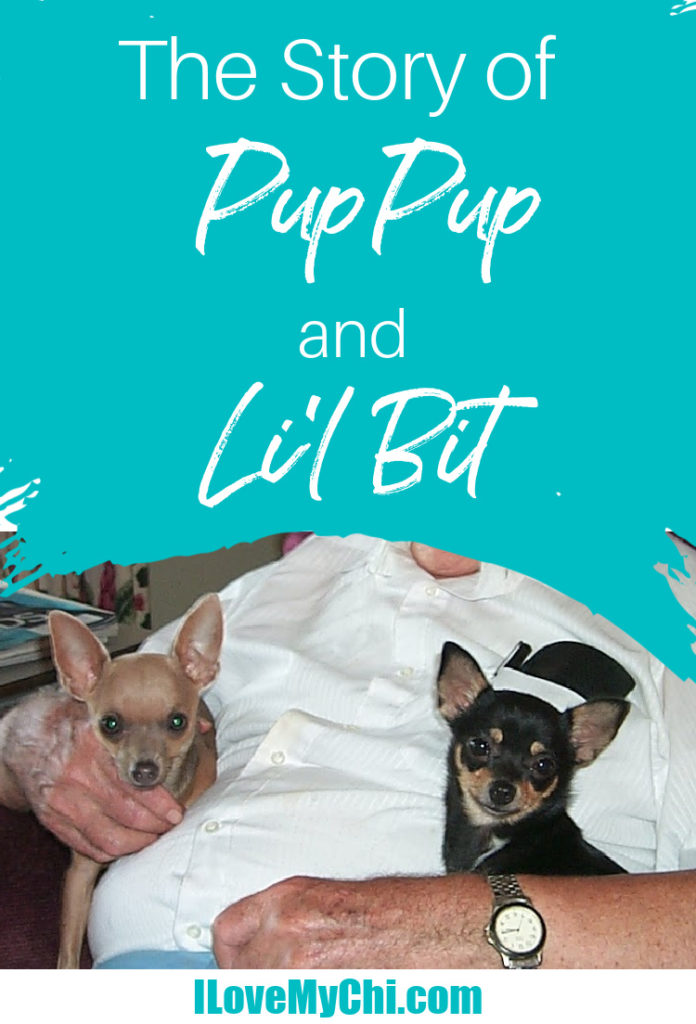 We love you PupPup and Li’l Bit!

Walking through the aisles in a pet store six weeks later, Lloyd and Sarah were gathering up birdseed, nesting material, etc. for their finch aviary.

Sarah reached over and put a small dog food dish in the basket; it went unnoticed. Then a small dog bed was placed in the cart. “Who’s that for?” Lloyd asked. Sarah started to answer, but glancing at her watch said quickly, “Oh my goodness we’ve got to go! We have an appointment to go pick out our new Chihuahua puppy.” 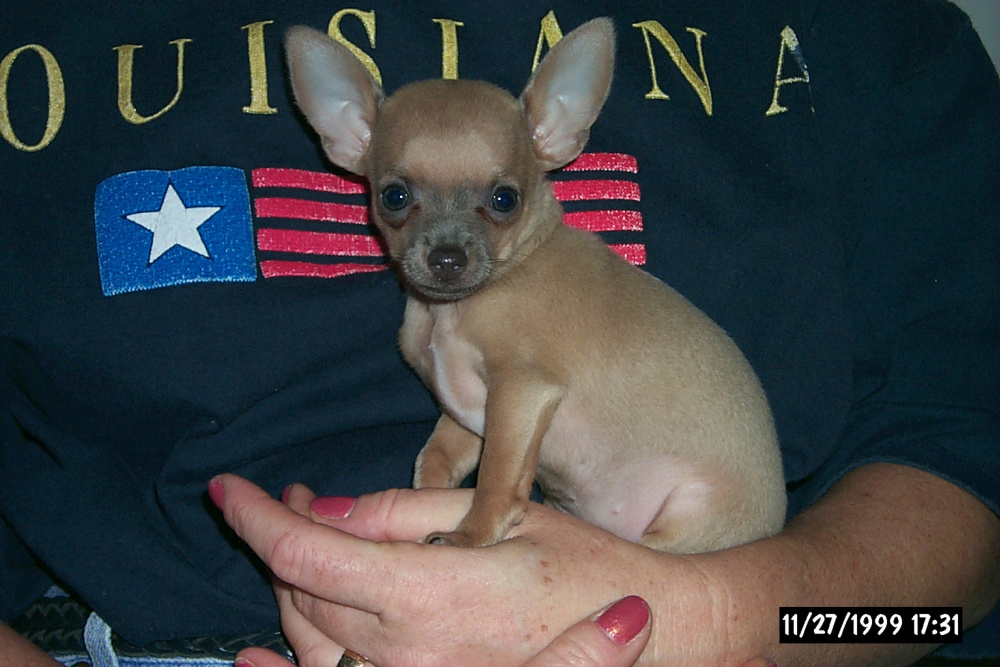 PupPup weighed 2 pounds, and fit in one hand. She grew up sleeping in Sarah’s shirt during the day and in the bed at night.

She went everywhere with Sarah, and had a bed and a litter box, a.k.a. “dumpster” in the van, in the office… in hotel rooms, in the camper…

When Grand Mama saw PupPup at Thanksgiving, she fell in love and didn’t want to let her go. So as Lloyd and Sarah were leaving from their weekend visit, GrandDaddy whispered to Lloyd and Sarah, “bring one of those for Mama next time you come.”

So another trip was made to the Stone Mountain Chihuahua house, actually named Gibbens Paws, and a beautiful little black Chihuahua went home with Lloyd and Sarah. The next day, Lloyd, Sarah, PupPup, and Li’l Bit made the journey from Lilburn, Georgia to Newberry, South Carolina. 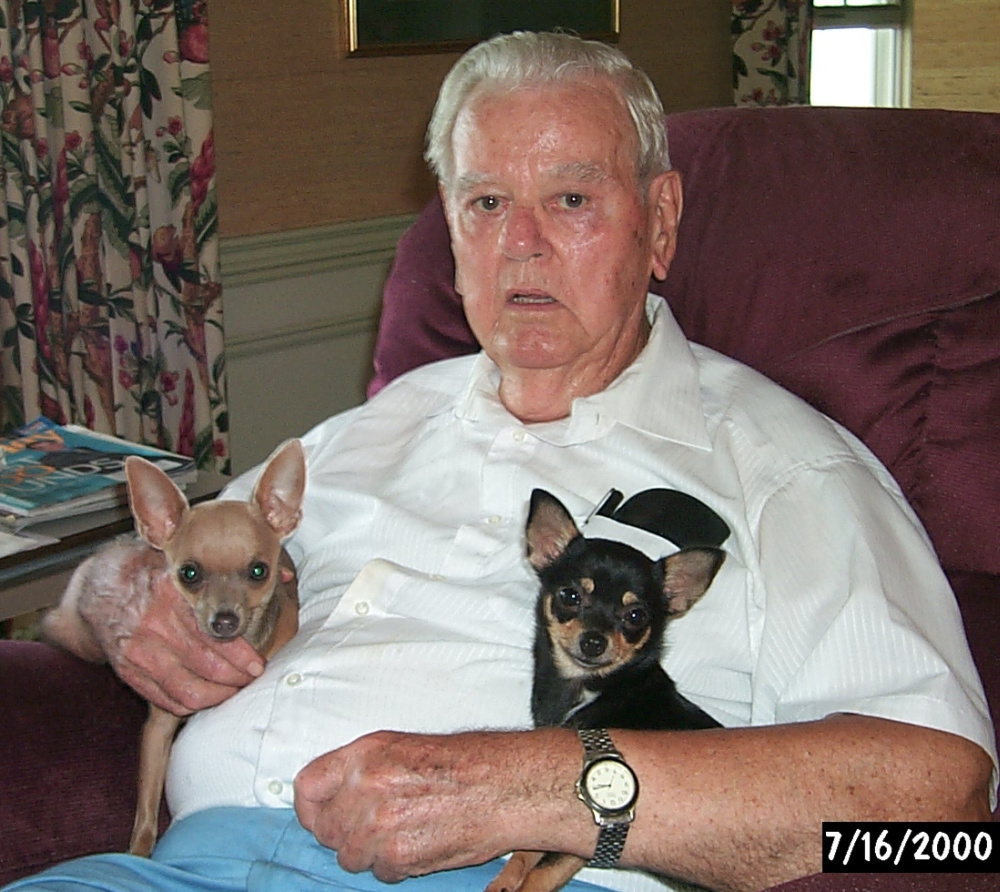 Sarah put Li’l Bit in her blouse and was holding PupPup in her arms when Mama opened the door. Mama reached out for PupPup and said “I’m gonna keep her this time!” “I was afraid you’d say that” laughed Sarah, “so we brought you one of your own!” Mama clutched that little black puppy and looked up at Cardaddy with hope in her eyes. “Can we keep it?” Cardaddy was just as happy as Mama to have a new little pet.

Over the years, Lil’Bit learned what it meant to be truly spoiled! At night, Lil’Bit would be tucked into her little bed, blanket and all, at 8:00 sharp. Mama loved that little dog so much.

PupPup spent three happy years as the only pet of Sarah and Lloyd. She had lots of adventures as she flew to Boston and Idaho, rode a four-wheeler in the wilderness, traveled in Sarah’s puppy pouch on the bicycle and her scooter, and did lots of kayaking, hiking, and other adventures. 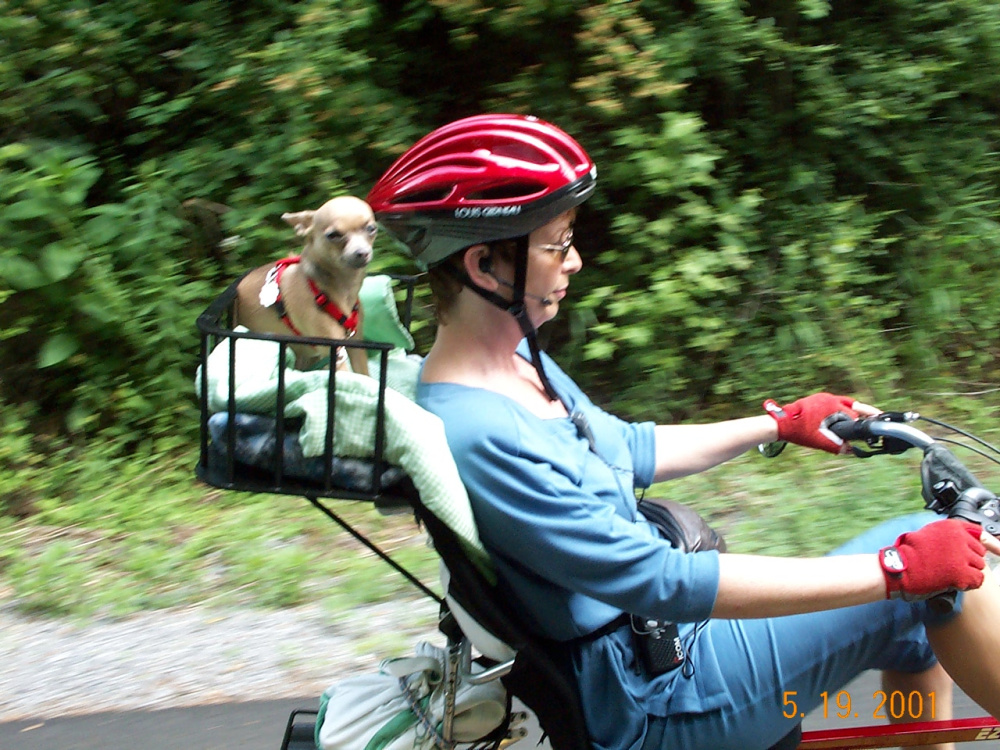 On the return trip from Idaho as we prepared to ride the MARTA train from the airport to our car, we were stopped by a Marta attendant who informed us that PupPup was not allowed on the train.  Lloyd countered that PupPup was a “SeeingEye Dog”.  “Oh, well that’s OK then”, replied the attendant. Sarah’s mouth literally dropped open!

As we almost boarded the train, a MARTA supervisor said, “Sorry, but you can’t take your dog on the train”. “But it’s a Seeing Eye Dog”, exclaimed the attendant!  While laughing inwardly, we managed to negotiate with the supervisor a special dispensation for Pup if she remained in her carrier throughout the train trip. We still laugh about that today.

PupPup was also a missionary! She went to nursing homes and visited people who very much needed a visit from a little furry friend. She would sit on their lap, or lie with them on their bed, and they would gingerly pet her and touch her tiny paws and head.

She went to children’s Sunday school so they could enjoy the wonder of such a tiny little dog. She had special clothes for these trips and ended up with quite a wardrobe.

Meanwhile, Lil’ Bit was a country dog; she would occasionally go out to bark at the big cows, but spent most of her time tasting the special treats that Cardaddy would give her! These treats included such things as boiled peanuts, kielbasa, and later Mama’s favorite treat, Oreo cookies. Needless to say, this little teeny-weeny dog who was sitting in the food dish when we first saw her, never lacked for food or love.

One of Lil’Bit’s most charming traits was her smile :^)… reserved for a select few people, she would pull her lip back and shine her pearly whites as her tail wagged at blurrrrr speed. She would spin in circles for her supper and was always right by Mama or Daddy’s side.

When Li’l Bit was three years old, she came to live with PupPup. Pup never really embraced her little sister, but rather tolerated her. She would give Li’l Bit such a hard time when Li’l Bit tried to lay in the bed with her that Li’l Bit started backing into the bed! The whole rest of her life, Li’l Bit backed into the bed, but they would both be snuggling when they woke up from their nap.

When we moved from the city to the country in South Carolina they both had lots of opportunities to travel, camping for several months at a time every year or two. 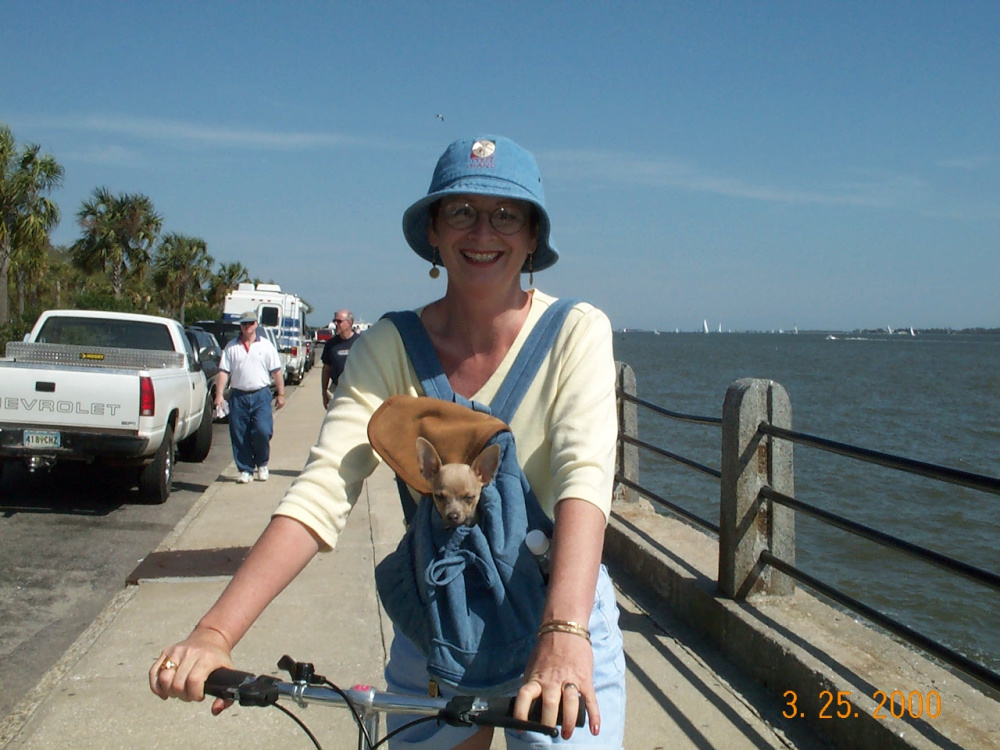 They loved visiting new places, and everyone everywhere loved those little Chihuahua girls. Lloyd would walk PupPup, and Sarah would walk Lil’Bit. How fun to see 6’2” Lloyd with teeny, weeny Pup on the leash. Both pups enjoyed kayak trips with Sarah, scooter rides, and hikes in the state parks.

When the girls were about 10 years old, a little boy Chihuahua named Mackie Boy came to live with them. They hated having this little brother; he was such a pest!  Over time, however, he and PupPup would play occasionally. Li’l Bit had absolutely NO interest in the little stinker and would demonstrate her rottweiler growl when he pressed his luck.

PupPup and Li’l Bit grew old as gracefully as they could. They struggled for a couple of years as their little bodies grew frail. The dog chiropractor helped, but their world of adventure, playing, and running around became so very small.

It was a beautiful sunny day; the kind of day that PupPup loved to lie in the sun on the deck. Li’l Bit always preferred the shade. We held them in our arms as their friend and doctor, Dr. Stroud, gave them a little injection. They went to sleep knowing we loved them. We had kept our promise; we gave them the best life we possibly could, and protected them always.

Wrapped in their little baby blanket together, we buried their little bodies by a tree near the house. We put a pile of rocks in the shape of a heart on top. We cried; it was so sad. We held hands and prayed, thanking our Heavenly Father for the great life the girls had enjoyed and how much we enjoyed them.

Love is expressed in many ways, and it isn’t always easy, but it’s worth it.

We loved our girls, PupPup and Lil’ Bit. Thanks to every one of you for the love you showed them too. There are thousands of memories, and many include you.

A Heavenly gift was received. A lost puppy turned up at our doorstep right about that time. He’s not a Chihuahua, he weighs 20 pounds, but he’s very sweet.

We took him in, and he has brought much laughter into our home with his silly puppy antics. Spencer and Mackie Boy play almost nonstop, taking breaks only to eat and nap. Puppy love…

Kathy, I see a lot about what it means when dogs lick their paws, but never really understood it. Can you tell me what it means?

There are different reasons dogs lick their paws. A lot of times it's because they itch due to allergies to the grass or pollen. Sometimes they get irritated because of the surface they walk on. Sometimes it's out of habit or an OCD thing.

Oh, that was such a fantastic story! I laughed and I cried, I loved it!

Just so wonderful truly a lovely touching stories chi,s are amazing im so greatfull for my little boy totally the best in the world regards Pat and Bumble

Dear Lloyd, You are a wonderful storyteller, and obviously have given the best life to your two chis. Thank you for sharing this story, and I bet they will both be waiting for you and Sarah when you cross the rainbow bridge, and have a wonderful time catching up with them. It is heartbreaking when a loved one passes, but these two will never be forgotten by you, Sarah or me.

Thank you again for telling your wonderful story, I have read it to my little girl, Heidi, who is now 14 years old, and as I told it, she looked at me with a happy expression on her little face. Heidi could be Pup pup's twin, they look so alike.

My love to you and Sarah,

I loved reading this story! It was so detailed and emotional. I really wish Lil Bit and Puppy were still with us, but at least they lived amazing lives. I wish the best for Lloyd, Sarah, Spencer, and Mackie Boy. 😊

I'm glad you enjoyed it as much as I did Danielle.