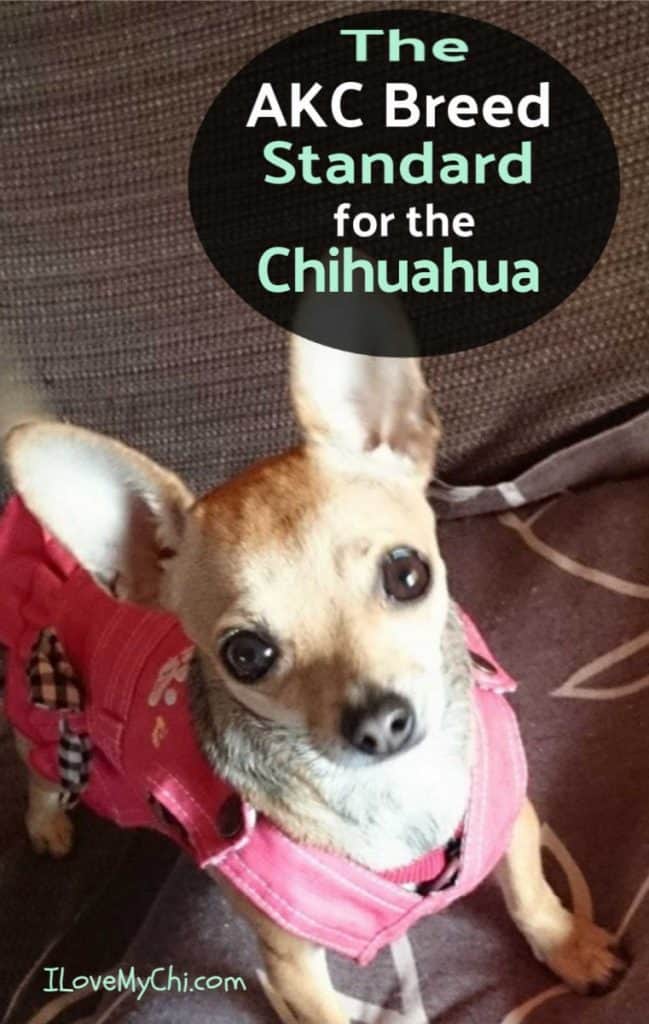 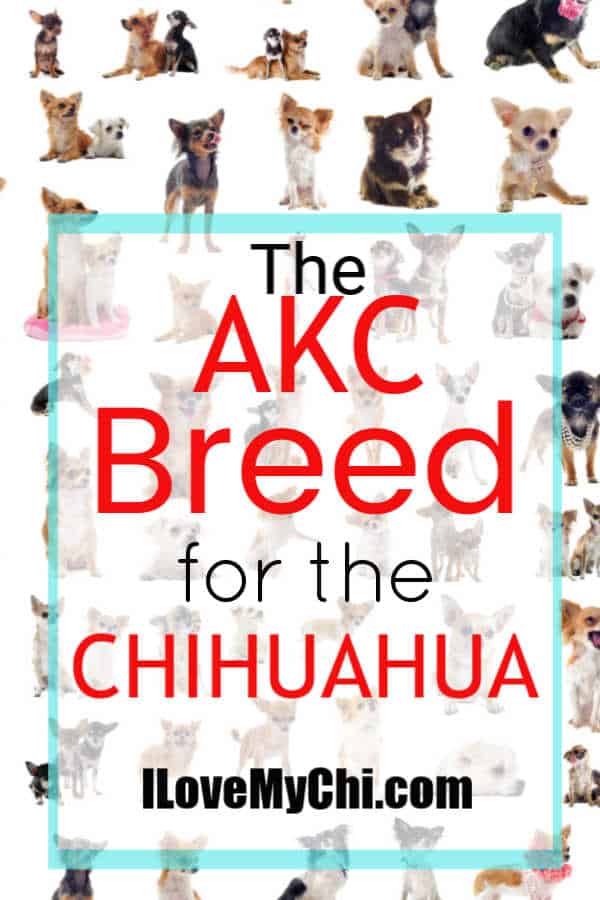 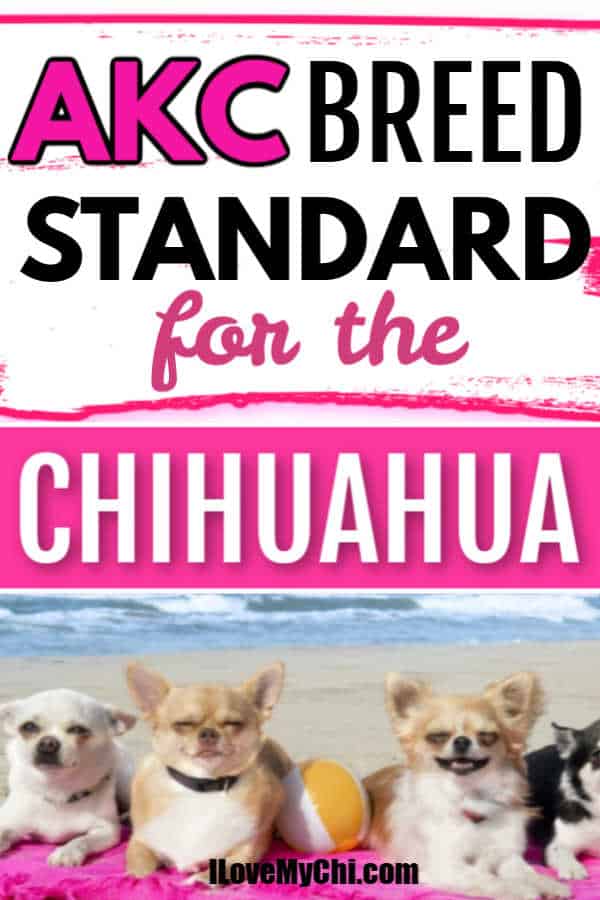 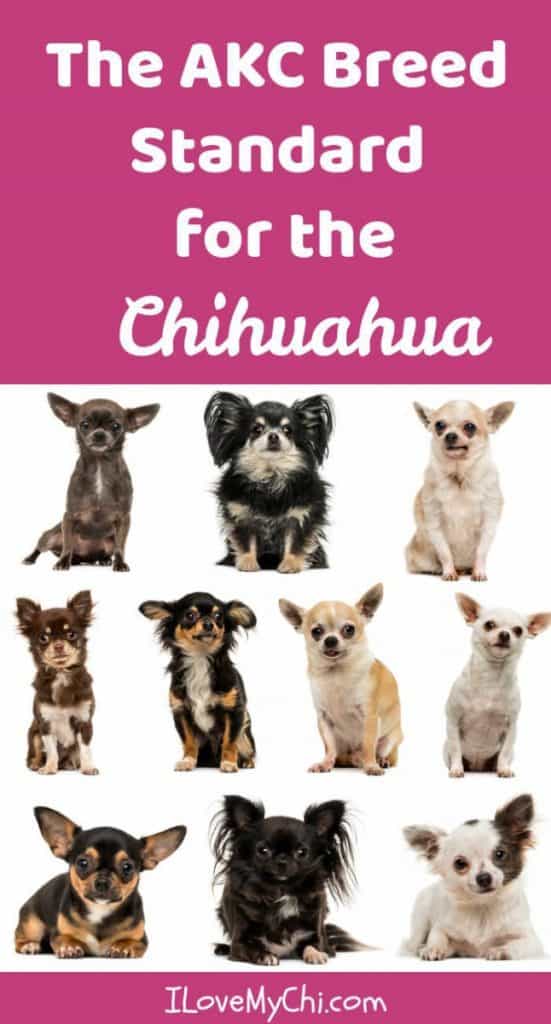 The tiny but mighty Chihuahua is one of the most popular dog breeds in the United States, with their popularity ranking 33rd out of the 195 breeds registered with the American Kennel Club. 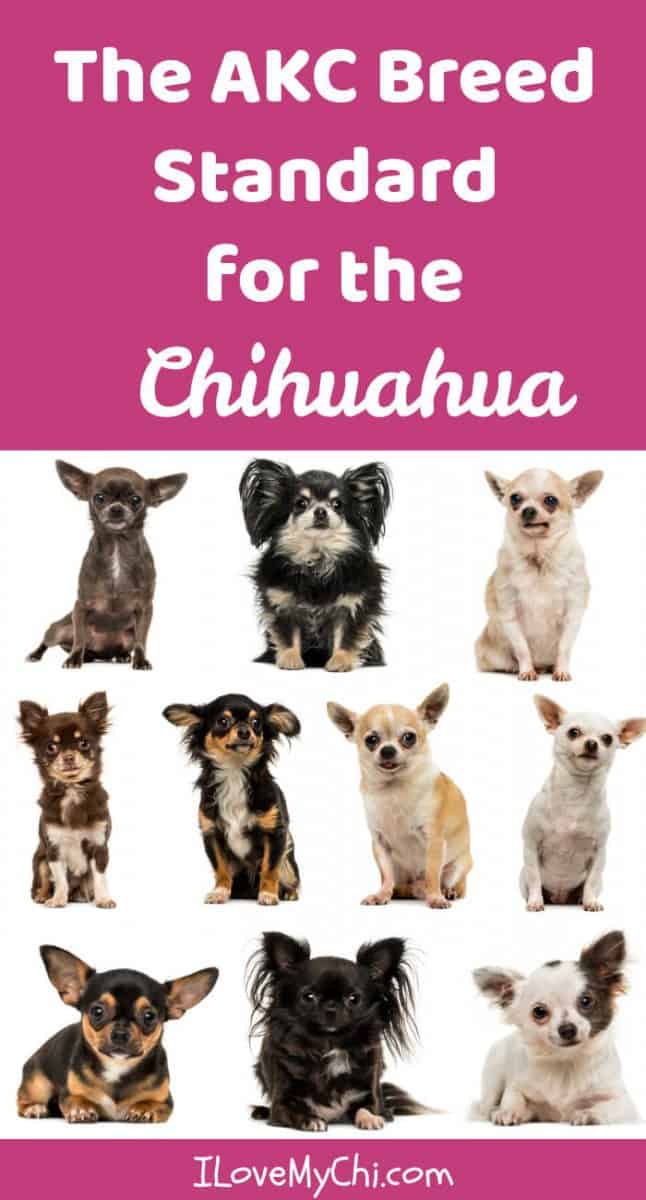 Due to their popularity, and considering that they are among one of the first breeds of dog established in the Americas, it comes as no surprise that there are many variations of Chihuahuas.

So what is the true breed standard? Why does it matter? If I want a Chihuahua, do I need a purebred Chihuahua? Read on to find out.

What is the AKC Breed Standard?

The official AKC standard for the Chihuahua includes every physical aspect of a Chihuahua, even areas you may never think to study carefully, as well as their temperament.

As of October 2008, the American Kennel Club formalized the breed standard description below: 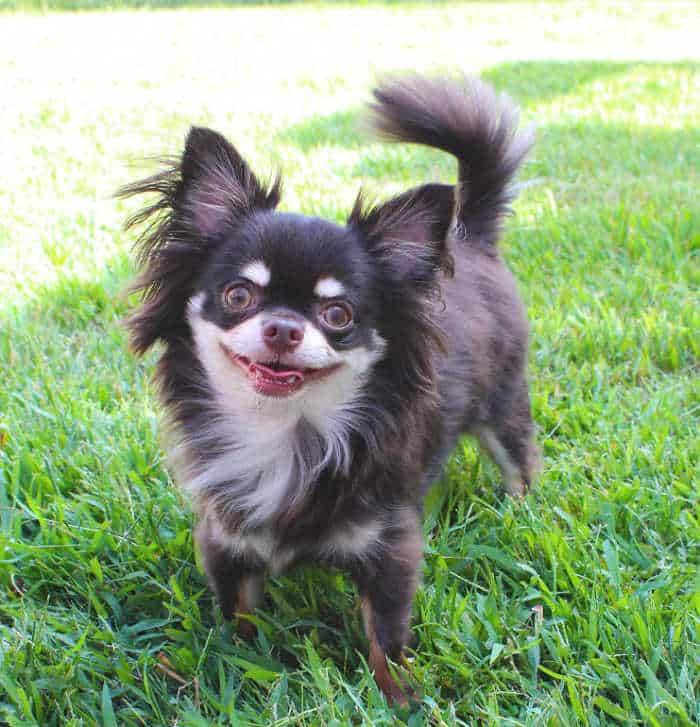 Chihuahuas should have a saucy expression. They are alert and project “terrier like” attitudes of self importance, confidence, and self reliance”.

As amusing as this description is, most Chihuahua owners will tell you this is completely accurate!

The AKC describes the general appearance of Chihuahuas as graceful, swift, and compact.

Heavy coats with under coats are acceptable.

The coat should be evenly disbursed all over the body, and some ruff on the neck is ideal. The coat on the head and ears should be a bit less thick.

In long coat Chihuahuas, the coat may be flat or slightly wavy, have a soft texture, and an undercoat is ideal.

The ears should be fringed.

The tail should be long with a full plume.

Judges look for a few ideal traits; feathering on legs and feet, “pants” on the hind legs, and majestic ruff on the neck.

The AKC states that Chihuahuas should only be groomed to be kept tidy, not to obtain a specific coat appearance as a Bichon would be groomed for example. 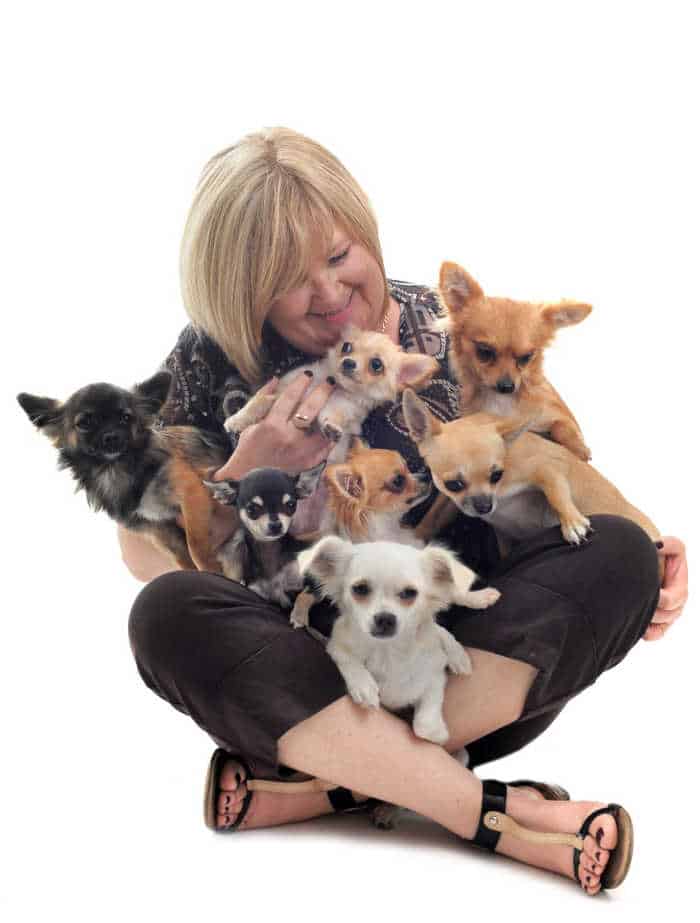 The AKC will accept Chihuahuas of virtually any coloring; solid or marked. This is good, because a significant variety of handsome colors and markings have developed over the years of their breeding.

The AKC lists the following colors:

The AKC lists the following markings:

The AKC states that Chihuahuas should not weigh more than six pounds.

They do not recognize “teacup” Chihuahuas.

Chihuahua’s bodies should be “off-square”; if their length is measured from shoulders to buttocks, this length exceeds their height at their withers.

Judges prefer that males have slightly shorter bodies than females.

They should have a round shaped skull, referred to as an apple dome skull. They may or may not have a molera.

Their eyes should not protrude from their faces, and they should be described as dark or ruby colored, full, round, and luminous.

In blond or white Chihuahuas, light eyes are accepted.

Blue eyes, or two different colored eyes, are considered faults. While this would not disqualify a Chihuahua from showing, it would severely impact their chances of winning.

Chihuahuas should have large ears, which are erect, not floppy.

They are held up more firmly when alert, and may flare to the sides at a 45 degree angle when relaxed.

Their stop should be well defined, forming a 90 degree angle when viewed from the side.

Their muzzle should be short and slightly pointed.

The nose should be black, or self colored in mole, blue, chocolate, or blond coats. Pink noses are accepted only in blond Chihuahuas.

Their bite should be a scissor bite or a level bite. An overbite or under-bite is considered a serious fault. One or two missing teeth are accepted.

An AKC Judge would want to see a moderately arched neck that gradually slopes to meet lean shoulders.

The shoulders slope into a level back, they should not be low.

The top line should be level.

The rib cage should be round, but not barrel shaped.

The tail should be slightly long, never tucked between legs, either curled over the back with the tip barely meeting the back, or carried up right.

Forelegs should be straight and set well, with free movement possible at the elbows.

Chihuahuas should have little dainty feet with cushioned pads, and toes should not be spread.

The removal of declaws is permitted.

AKC Judges expect Chihuahuas to have muscular and sturdy hind quarters. Angulation of hind quarters should be equal to forequarters. Hocks should be well apart, and set neither out nor in. Declaws are permitted to be removed.

AKC Judges will look for Chihuahuas to carry their heads high, and display a sturdy, swift and firm gait.

Their front reach should be equal to their rear reach.

The front and rear legs should coincide toward their central line of gravity as they move faster.

If a Chihuahua has any of the following physical characteristics, they will be disqualified from showing:

A dog with these physical traits would likely never be bred by anyone who shows, as this would risk passing these traits to puppies.

Why does the breed standard matter?

From a practical standpoint, breed standards matter because they define what a typical dog of a particular breed should look like. The name of the breed and what it looks like is formally defined by the American Kennel Club. It is comparable to a dictionary telling you what a word means. If you think of a certain breed of dog, you likely picture him a certain way; this picture was painted by the AKC.

Others plan to breed dogs, and want quality stock to breed from. Showing and breeding are often linked, and Chihuahuas who conform to the breed standard are most valued in these circles. Chihuahuas who have won shows fetch a higher price per puppy when bred. Breeders who actively show dogs may offer their puppies who do not conform to the breed standard for a reduced rate and refer to them as pet quality puppies.

Do I need a pure bred Chihuahua? 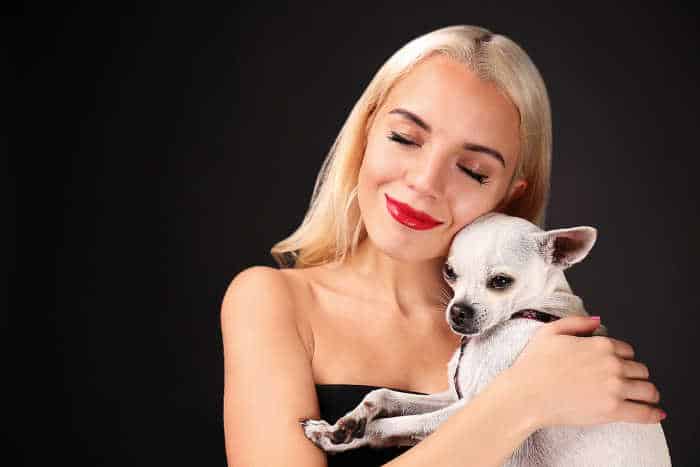 If you just want a Chihuahua as a pet to love and enjoy, it does not matter if they conform to the official breed standard.

Chihuahuas who are not conformed to the breed standard are not less healthy or any less valuable as an individual.

In fact, dogs who are not pure bred may have fewer health problems than those who are pure bred, due to the simple fact that their genes were collected from a more diversified pool.

Further, Chihuahuas who are not born to an AKC official litter are often less expensive to purchase, as puppies purchased from “pet quality” breeders tend to cost less than puppies bred by breeders who breed Chihuahuas to conform to the AKC standard.

That being said, there are many Chihuahuas who need homes in the world due to their long life span.

If you plan to adopt a Chihuahua, you will easily be able to find a mixed breed or purebred adult, a mixed breed puppy, or even a purebred puppy, if you search diligently.

I adopted a rescue Chi at Christmas time -8-9 yrs old and 10 lbs. Can not remember a better present. Never had a Chi. I rescued her but really believe she rescued me.

I'm glad you adopted her Bill. So often the older fur babies are overlooked. But as you have found, they make great companions.

I find it impossible to brush my dog's teeth - so hard to get into that tiny mouth - best I can do is put toothpaste on gauze and use my finger to try and reach teeth. I am using product in water but not sure of its value? any help?

Yes, gauze with doggy toothpaste is perfectly fine to use. You don't really need to get the inside of the teeth, just the outside of the teeth. Gently pull back on the corners of the mouth to reach the back teeth. I haven't tried the water stuff but I have heard that they do help. Also dental chews help too. We love Ark Naturals.

Thank you for this article. I thought I had read that they are not show breed. I enjoyed reading this article since I trust you, Cathy! It is so difficult to adopt through a rescue org. I feel like I am betting at an illicit MMA match. Thanks again!

@Cathy, Our little Dexter is a 'ShiChi" mix, half Shih Tzu and half Chihuahua. He was a rescue, now he is a prince. Ha! He is a GREAT little dog. We found him - and his liquid brownie eyes - on Petfinder and drove 2 hours from our home in SC to get him. The rescue was so careful about following up on our references with vets and personally. This is how it should be. I never thought I'd ever 'have a Chihuahua'. I thought of them as shivery, somewhat aggressive and very barky. We have had Pugs for years and they are such sweet dogs. This ShiChi mix is special and everything I have read about Chi's tells me that Dexter's smarts and 'spicy' attitude and his devotion and love are typical of the 'breed'. I highly would recommend one to anyone wanting a small, fun, smart and loving new family member.

You're welcome Maria and I'm sorry you are having so much trouble adopting through a rescue. I know many of them do seem to make it difficult. I know they only want the best for the dogs but jeez!

I love my Eva and Alfie, I have never thought about them being breed standard or not, I have posted a pick, are they deer or apple headed and what would their colouring be classed as?

Your cuties look like appleheads to me Angela. I can't totally tell from the photo about the coloring but the lighter one looks to be a cream or a fawn and the other one looks like a black mask with white markings.

I really enjoy this newsletter. It gives so much useful info about Chis that I never knew. I have four and have had them for a while, oldest being 15, youngest being 3. I love them all w/all my heart. Two are rescues & the other were given to me. I don't care if they re show standard or not, they give me purpose , joy, unconditional love & make me very happy. Thank you for providing this newsletter.

My fawn one looks just like one of yours. Love both my males with all my heart. I have one apple head and one deer head.

I'm so glad you enjoy it KellyAnn! I'm like you. I don't care if they are show quality or not. My little Lucy would have been show quality except she has crooked front legs. Because of that, no one wanted her. Their loss, my gain! She is a wonderful little dog!