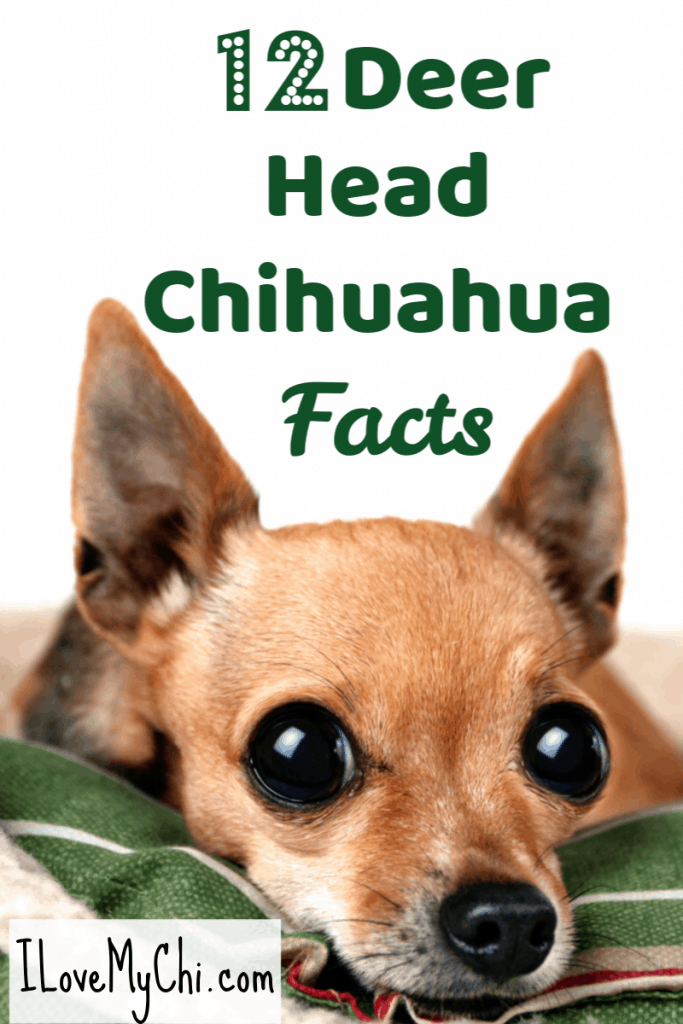 Is the adorable deer head chihuahua the right dog for your family? This toy breed resembles a deer and is known for its big personality. Learn about the characteristics, pros and cons, and how to care for this spunky dog!

What is a Deer Head Chihuahua?

The deer head chihuahua has a face and head shape that resembles a young deer. Other characteristics that set this type of chihuahua apart from the others include a longer muzzle, larger ears, and a sloping forehead.

They are often referred to as a large dog in a small dog’s body. They are confident, sassy, feisty, and full of energy. Deer chihuahuas have an attitude and big personalities.

The deer head chihuahua is classified as a toy breed, but the rest of the chihuahua’s history is widely unknown. Some have said that the Aztecs owned this dog breed back in the 1500s.

The chihuahua is widely known as a companion dog as well. However, they didn’t gain any recognition from the AKC until the 1900s. When this happened, the chihuahua was split into two categories: the Deer Head Chihuahua and the Apple Head Chihuahua.

Now, let’s take a closer look at some facts about the chihuahua that you should be aware of in case you are looking to add a small deer chihuahua to your family.

1. When you look at a Deer Head Chihuahua vs Applehead, Deer Heads are usually bigger than Apple Heads. The standard for the chihuahua breed is 6 pounds and under. Deer heads can get up to 12 pounds.

2. Deer head chihuahuas have a longer muzzle. Their muzzles slope more and are longer than Apple Heads.

3. Deer chihuahuas can have a round head, but it is not as round and bulbous as Apple Heads. Although they do look more roundish than other dog breeds.

4. Deer Heads’ eyes aren’t usually as large, round, and bulbous as Apple Heads. Again though, they often look more round than other dog breeds.

6. The deer head chihuahua can come in any color but are often fawn-colored. Along with fawn, other colors include chocolate, black, red, cream, white, silver, and blue.

7. The deer chihuahuas come in many patterns too. Patterns for this little dog include spotted, tri-colored, marked, piebald or splashed, merle, and brindle.

8. They can have long hair or short hair. Just like Apple Heads, these tiny canines can be long-haired or short-haired. In rare cases, they can be wiry-haired too. The long-haired deer head chihuahuas require more maintenance for their coats.

All the Chihuahua Facts You Need to Know

Do You Have an Apple Head or Deer Head Chihuahua?

55+ Facts About Chihuahuas That You May Not Know

9. Deer heads are not recognized as the breed standard by the AKC. It doesn’t mean they aren’t purebred chihuahuas. It just means they can’t compete in dog shows.

10. Deer chihuahuas have fewer health problems than Apple Heads. This is probably due to the fact that they tend to be a little larger. Generally, the smaller the dog, the more health problems it is prone to.

12. They tend to be less high-strung and easier going than Apple Head chihuahuas. Of course, there are exceptions to this.

Pros and Cons of a Deer Head Chihuahua

Now, let’s take a quick look at some of the pros and cons of owning this toy breed.

Chihuahuas are the world’s smallest dog breed, so special care and attention need to be taken when owning these very tiny dogs.

Caring For Your Deer Head Chihuahua

Both varieties should also get a bath every three weeks as needed. Brushing their teeth daily is also necessary since the deer head chihuahua is prone to dental issues that could seriously affect their overall health.

If you have a deer head chihuahua puppy, you want to take the same care as you would an adult chihuahua pup. The chihuahua puppy will have what is known as a molera or soft spot. It is very similar to the fontanelle we see with babies. Translated, molera simply means “hole in the head.”

No, they are quite common. And 2 apple head chihuahuas can produce deer head puppies.

How much is a deer head chihuahua worth?

Well like any dog, they can be but for the most part, they are loyal, sweet dogs.

It depends on your point of view. If you are wanting to show or breed your chihuahua, then no, deer head chihuahuas are not better since they don’t conform to the breed standard.

However, as for the deer head chihuahua personality, many believe they are friendlier than apple head chihuahuas. So if you are looking for a pet chihuahua, deer heads may be better for you.

Yes, though they may not look like the “ideal” chihuahua, they are still purebred if both parents are purebred.

The chihuahua breed is known for its loyalty and deer head chihuahuas are no exception.

How big will my deer head chihuahua get?

Yes, deer head chihuahuas do shed. But they usually aren’t heavy shedders like some dog breeds are.

You can never underestimate a deer head chihuahua. Despite their size, this small breed is spunky and has personalities far larger than their size.

With proper love and care, deer head chihuahuas make perfect companions and are sure to be a great addition to any home.

So, what kind of chi do you have? If you are a fellow chihuahua owner, leave a comment. We always love chihuahua stories, too! We would love to see and hear all about your chi baby.

My site no longer supports readers' photos (the plugin I was using stopped working and I can't find a replacement for it). I like the name Dixie.

My Deer head was adopted at about 2 years of age. She is very temperamental. Growls etc. when moving her, tries to bite but never hard. Seems like all love and snuggling has to be on her terms only! Sounds bad but really, she is my pal and has more good points then bad. She is smart. Sometimes I say too smart. She does not like car rides. She' knows if I'm going out by the way I dress and will hide under the bed. Although she does not like cars she loves riding around the neighborhood on the Golf cart. She loves people and often shows more love to others than me! We live alone, just the two of us so I think she figures she has me all the time. Love her dearly and yes she is spoiled rotten!

We totally get it Russ. Chis can be little spitfires but we adore them. I bet your girl is adorable riding around your golf cart.

I’m trying to find all the info I can on my deer head she’s a handful very spoiled by us she is white and tan with beautiful green eyes we just love her she’s 16 mos old a female named Bella!

I bet she's gorgeous with those green eyes Frances.

I have a deer head chihuahua & she is going to celebrate her 19th birthday right after Christmas. Dolly was 7 weeks old when I received her as a Valentine's Day gift in 2004. She is blind & deaf now but still in pretty good health; just a little wobbly on her legs. She is the very best gift I have ever received. Most of the characteristics that were described in this article are pretty accurate about her except she has always shed terribly. I used to tell her that I swept & vacuumed up another dog every day & why aren't you bald by now ? I said I should have bought stock in the company that made pet hair rollers. She is also the easiest potty trained dog I have ever owned (3 weeks).

Thanks for sharing about her Joseph.