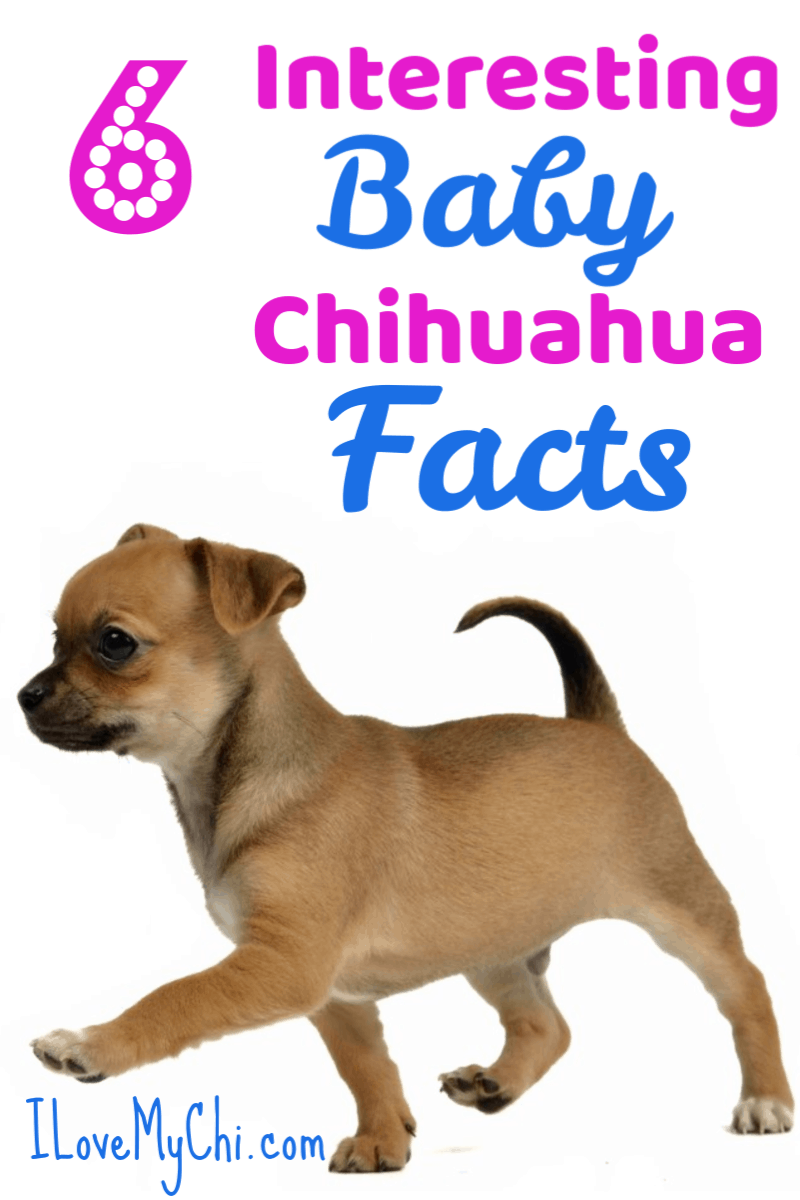 Chihuahuas are among the most popular dog breeds due to their small size, their vivacious personalities, and their unique facial features. These traits make them seem eternally puppy-like.

But what are Chihuahuas like as puppies? It turns out that Chi babies have a number of characteristics that set them apart from other puppies.

Chihuahua puppies come in different sizes and shapes. For example, some are known for their apple shaped head and large eyes, while others may appear to be more fox-like in appearance like the deer head chihuahua. There are also several different variations when it comes to their coloring as well and can be either long haired or short haired.

Chihuahuas feel as if they just know everything and tend to stay on top of everything going on in the household. They are highly confident, energetic, and regal. They have a very big attitude and personality to match. They are also fiercely loyal and protective over their owners.

Depending on the coat of your baby chihuahua, they may require different grooming needs. A chihuahua baby with a smooth coat and short hair requires minimal grooming and is low maintenance. Periodic brushing may be all that is needed. Longer coat chihuahua babies, however, want weekly brushings to help keep tangles and mats at bay. So, a long haired chihuahua is definitely going to be a bit more work.

Your new chihuahua pup responds best to positive training. They are also well aware of just how cute they are and will definitely try to use that to their advantage whenever possible. Make sure your guidance is firm but loving, and they will excel in training.

Yes, chihuahua pups seem to be full of energy, but because of their small size, all that energy is easily dispelled inside the home. Just running from room to room to their owners in the home is a good amount of exercise. Short walks around the block can also help keep their energy levels under control. If they seem tired or they begin panting heavily, then they are probably tired. Pick them up and walk them home or until they stop panting.

As we all know, baby Chihuahua puppies are ridiculously tiny! The chihuahua is also known as the world’s smallest dog!

Ever wondered exactly how small they could be? Well, they can weigh as little as 2.5 ounces when they are born.

To put that into perspective, the average lemon weighs about 3 or 4 ounces.

Their small size is part of what makes Chihuahua puppies so endearing to people. 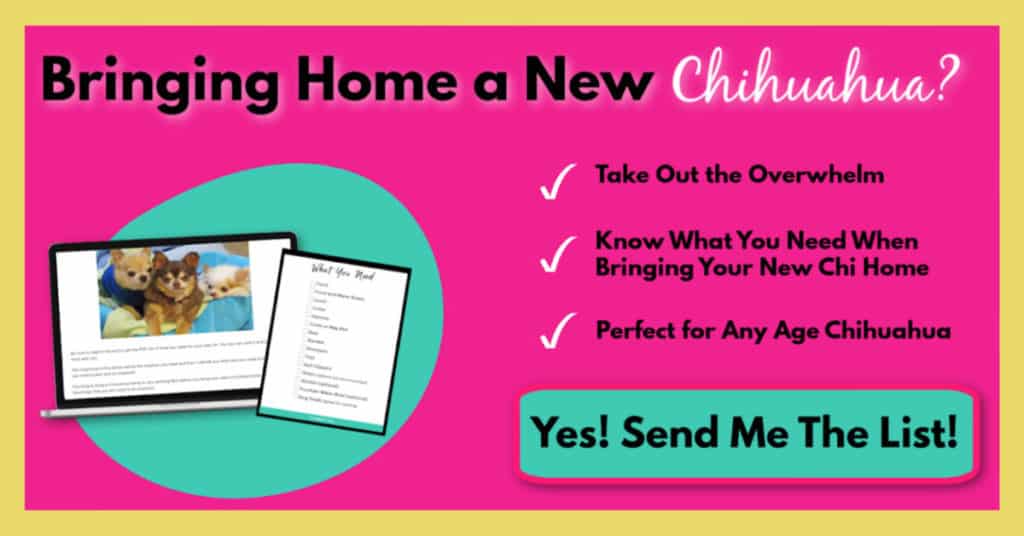 Even the largest Chihuahua newborns do not usually exceed 5.5 ounces in weight. Then you also have a teacup chihuahua who will grow up to be even smaller in size compared to a different dog breed and other chihuahua types.

During their first few weeks of life, Chihuahua puppies grow rapidly, more than doubling in size.

They are usually finished growing by the time they are about 18 months old. 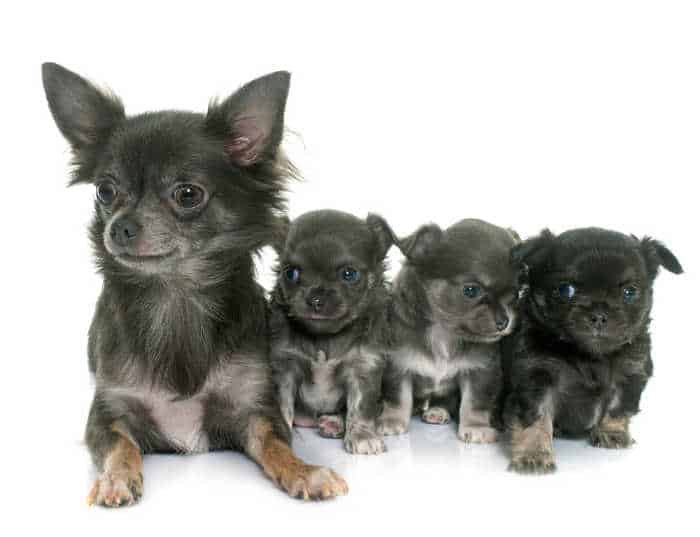 Even though baby Chihuahuas are extremely small, mother Chihuahuas often have a difficult time giving birth.

The mother’s pelvis is often simply too small for her to be able to give birth naturally.

Baby chihuahuas are usually born in litters of two to five, and a cesarean section is often required to get them out. 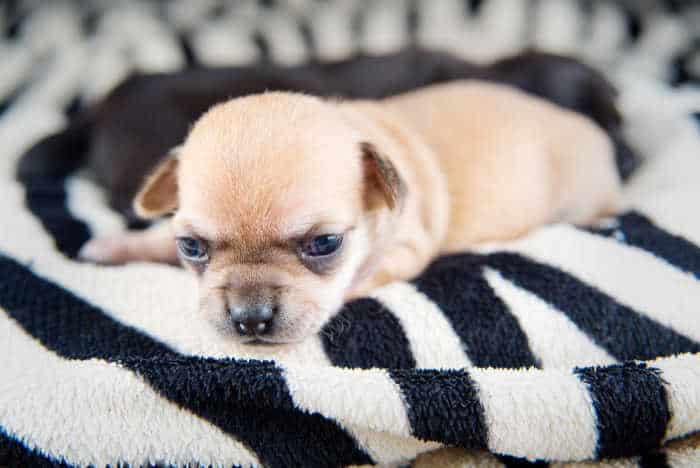 Litters of baby Chihuahuas may be small, but that doesn’t mean that the possibility of sibling rivalry is eliminated.

In fact, Chihuahua puppies can be somewhat aggressive towards their siblings and may bully each other. They may fight for dominance, with the larger puppies in the litter often coming out on top.

The social dynamics in a litter of puppies may affect the development of each puppy’s personality.

For example, exceptionally small puppies who get picked on by their siblings may grow up to be more timid and docile. 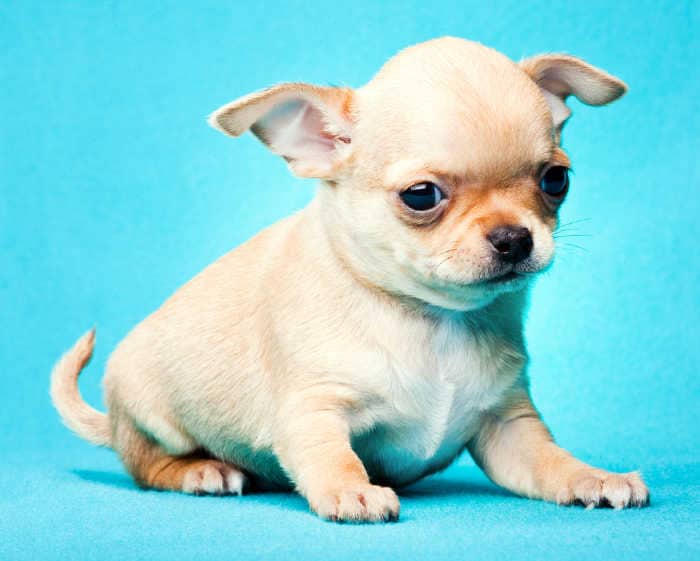 It is normal for baby Chihuahuas to be a little bit chubby. While they are growing, very young Chihuahua puppies can have proportionally big tummies.

There is usually no reason to be worried about this. The puppies tend to slim down as they transition into adulthood, so enjoy seeing them with their adorable round tummies while they last.

If a puppy is over six months old and still seems a little chunky, it may be time to cut back on the amount of food the puppy is consuming.

Making sure the puppy is getting enough activity is also important. Baby Chihuahuas are usually full of energy and are happy to get extra playtime.

If you have a young Chihuahua and are not sure if it is getting the appropriate amount of food and exercise to maintain a healthy weight, it is a good idea to consult a veterinarian.

Baby Chihuahuas have very fragile heads. This is because they are born with a hole in the skull, known as a molera.

Chihuahua puppies typically have this hole until they are about six months old. If they still have it by the time they are a year old, then they will have it for life. My Lucy has this issue.

Even though the molera is normal and extremely common in Chihuahuas, it can make the puppy vulnerable to injuries.

It is important for people to be mindful of this when handling Chihuahua puppies that are six months old or younger. Be especially gentle when petting a baby Chihuahua’s head, and do not press on its head.

Of course, it is a good idea to be gentle when handling any kind of puppy!

Did you know that chihuahua babies are born with floppy ears? Most of the time, their ears will become erect as they grow older. If yours has grown and is no longer a puppy and its ears are still floppy, then you have a rare Chi dog.

Once out of the womb, their ears are floppy. Their ears begin to stand up around 3 months of age; however, some may take longer than others for this to happen. When teething starts, some Chi puppies will experience their erect ears flopping or dropping temporarily.

To due their small size, it is important that chihuahuas are not left outside unattended at any time. Hawks, coyotes, and other predators may easily mistake them as prey due to their small size. While the chihuahuas are babies, it is also a good idea to keep small children away to help avoid accidental injury to the puppies.

Another health risk that affects baby Chihuahuas is hypoglycemia. This is a medical term that means that the puppy’s blood sugar has dropped too low.

Every Chihuahua owner should be aware of the symptoms: fatigue, lack of coordination, lack of focus, and convulsive movements.

Baby Chihuahuas are at risk for this because they are so small. Feeding the puppies often can help.

Young Chihuahuas that are less than three months old should eat at minimum three times a day, but some puppies may need to eat more often than that.

Owners of Chihuahua puppies can keep sugar syrup around to put in the puppy’s mouth in the case of a hypoglycemic emergency.

Despite having a few scary health risks like those mentioned above, Chihuahua puppies are one of the healthiest dog breeds!

Hypoglycemia becomes less of a threat as they age, and the molera that the puppies are born with usually closes most of the way by the time the dogs become adults.

Fascinating chihuahua facts – how many did you know?

If you decide to adopt a young Chihuahua puppy, you can expect to keep him or her around for up to 18 years and sometimes even longer. This is just the average chihuahua lifespan that has been reported.

Be prepared for the commitment, but also be prepared to fall in love. The Chihuahua puppy you adopt may not be a baby forever, but he or she will always be your baby.

I just got my deer head chihuahua a week ago. I named him Pepe LeBoo. He is a gift from my daughter for this Christmas. My entire family adore him. He’s three months old tomorrow. I’ve never seen a tiny dog with as much energy as he has !

I love that name Diane! Congrats on your new baby!

I have 2 short hair apple head chi’s that produced a liter of 5 adorable pups all extremely different looking from each other. 1 chocolate brown long haired, 1 tan deer head, one that looked identical to the father, one black longhair, and one one blue longhair. My husband finally went soft and allowed my stepson and I to choose one pup to add to our family. It was an extremely tough decision and I’m the end it was the deer head who chose us. This little guy outgrew his parents within 6 months and he is playful, social, and now 4 years later still is the best behaved chi in our home. I was able to raise this chi (with much help from his mom Lucy) from his birth and it makes him so special to me. He slept nuzzled under my chin for months as a pup and I will cherish those beginning memories forever.

I LOVE your story of your special little guy Rachel!

My part chi/part shitsu will be one next month! Love her to death - looks more chi than shitsu. Having trouble housebreaking! Have fenced backyard and she loves being outside but she will come in and find a corner to do her business! It’s frustrating! Any advice?

It is frustrating. Little dogs in general and specially chis seem to be the hardest dogs to house train. We have an article on it that may give you some ideas here: https://ilovemychi.com/housetraining-your-chihuahua/

We just rescued 2 7 week old Chi littermates. One is cream (or white, not 100% sure) and one is brown, tan, and white splash. We named them Pearl and Jed. (lol) They're precious. We have always only had Yorkies so the Chi experience is new for us but we are in love already. Our Yorkie likes them but at a distance. These Chi babies are so smart and attentive with such bright, full, eager eyes. They watch us, make straight eye contact, and talk to us when we talk to them. They are already puppy pad trained about 80%, we are curious about when to start teaching them to go outside to go potty? Any advise? Thanks!

You can start now if you want. If you have a fenced backyard, take them out but stay with them as birds of prey have been known to scoop them up. If your yard isn't fenced, keep them on a leash while out there.

I have a 6 month old VERY energetic baby girl named Juno. She just now weighs 2 lbs and 7 ozs. I'm wondering when I will know what type of hair she's gonna have? My Mom has a short and a long haired but her long haired was a rescue and was 3 already when she got her. My puppy has the softest hair and right now I just can't tell and am just curious.

By 6 months, there should be some signs that she will be long coated if she will be. Very soft hair is one of them. And it will look slightly fluffier and longer than it would on a smooth coated chi. If you want to email me her photo, I can take a look and see if I can tell. Email it to cathy@ilovemychi.com and remind in the email me that you want to know if she is long coated or not.