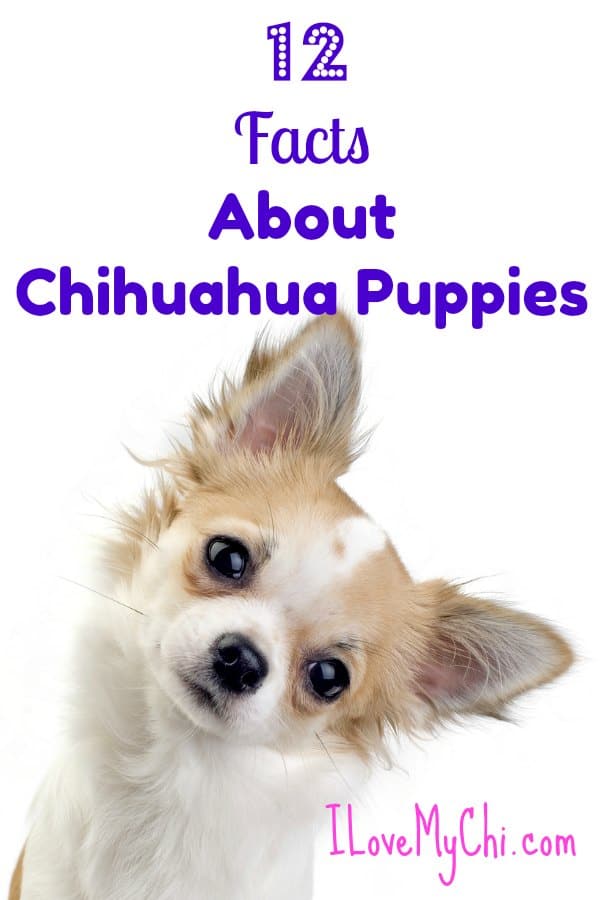 Did you know that the Chihuahua is the smallest dog breed and is named after the Mexican state of Chihuahua? Even though they may be small in size, you will also find that they have big personalities that make up for it. Even for a small dog, they are good in the agility and obedience departments like other dog breeds as well and have actually been named among the top ten watchdogs by experts!

Now let’s take a look at some facts about Chihuahua puppies that make this little dog breed stand out from the others.

Check out our main post that showcases all our chihuahua facts articles!

HOW MUCH DOES A CHIHUAHUA PUPPY WEIGH AT BIRTH? 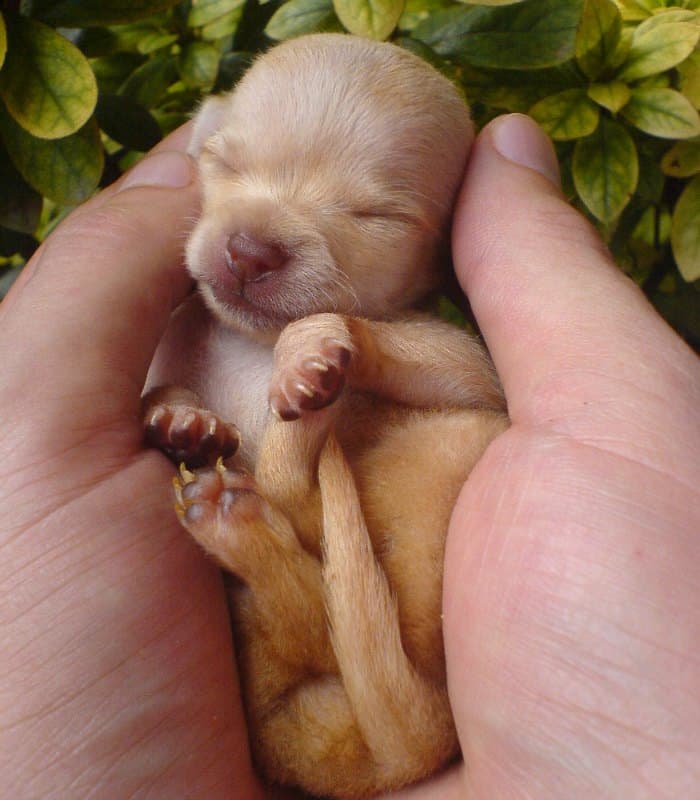 A Chihuahua puppy will usually weigh between 2 to 6 ounces at birth.

That may sound tiny, but Chihuahua’s moms still often need to have a Cesarean section because the puppies’ heads are large in comparison to the rest of their size.

In the Complete Chihuahua Encyclopedia, it states that if the Chihuahua pup weighs three ounces at birth, then it will most likely weigh around three pounds by the time it is 18 months old and fully grown.

It is good to know your pup’s size because it can help you make more informed decisions when it comes time to choose their crate, bed, harness, leash, and other accessories the newborn puppy will need.

Having this kind of understanding about their weight early on can also help you identify problems early if your small breed dog is underweight or overweight.

WHEN CAN YOU TELL A PUPPY’S EYE COLOR? 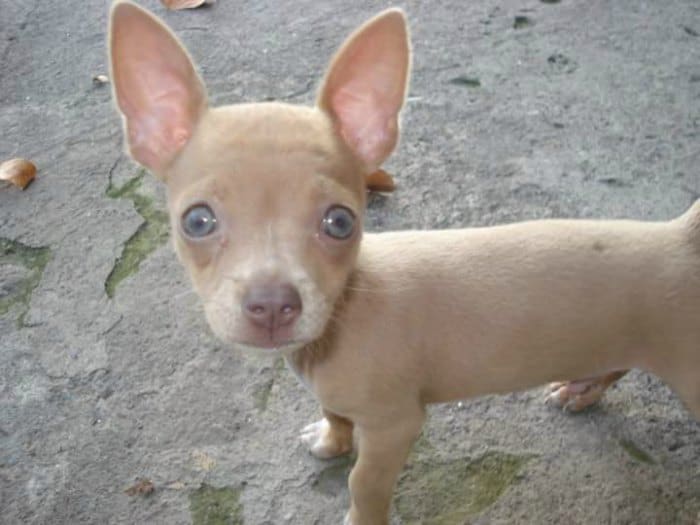 Many puppies have blue eyes when they first open their eyes. But their eyes can also be other colors such as gold, green, gray, or brown.

Usually, they are paler when they are young puppies but change to their permanent color between 9 to 16 weeks old.

The permanent eye color can change at 16 weeks old as well. Your Chihuahua will start to open its eyes around the two-week mark. In the beginning, the eyes will look almost foggy and have that bluish tint. The eyes are always lighter in the beginning because a puppy’s iris lacks melanin.

WHEN WILL MY CHIHUAHUA’S EARS STAND UP? 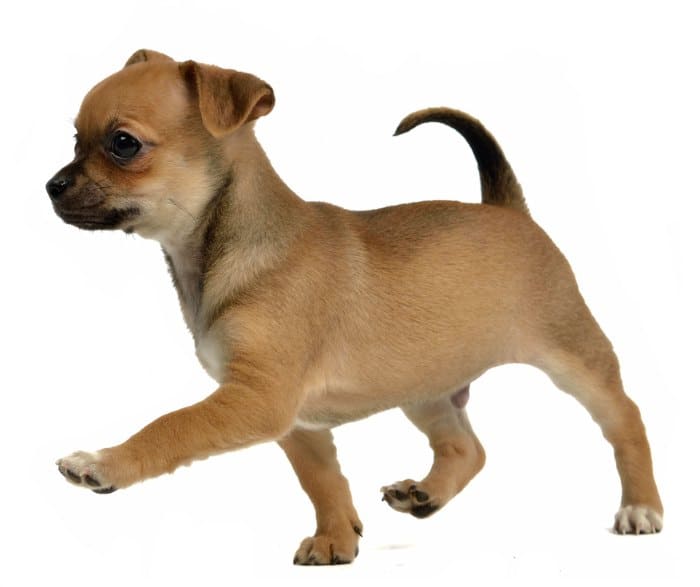 The ears usually start standing up at around two to three months old.

If they haven’t stood up by six months of age, then they probably aren’t going to stand up at all. And that’s okay.

Some Chihuahuas have floppy ears, and they are just as cute and lovable as any other Chihuahua.

When Chihuahuas first come out of the womb, their eyes are floppy. Remember, there really is no set timeline when it comes to when and if their ears become fully erect. Some Chihuahua pups can develop sooner, while others may take more time.

HOW OFTEN SHOULD I FEED MY PUPPY?

It depends on the age of the puppy, but usually, feed them 3-4 times a day until they are a year old.

The best time to feed your puppy, its first meal is around 7 in the morning, then again at noon, and around 5 for dinner. Following this easy to remember timeline allows ample time for the dog’s food to digest and allows them to take one more trip outside right before bedtime. 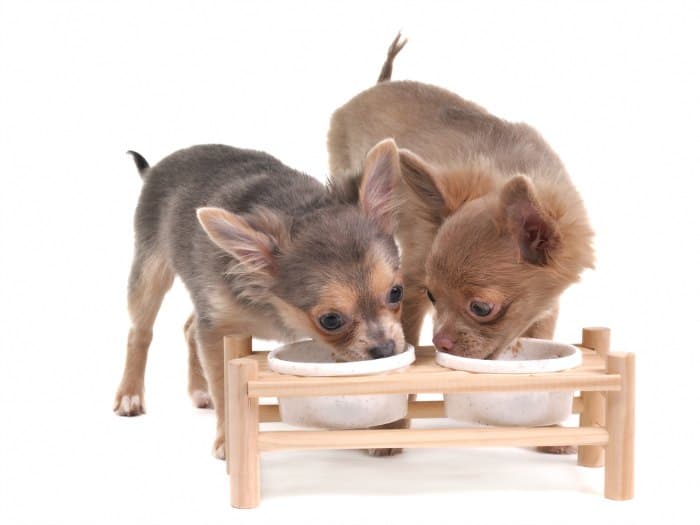 HOW MUCH SHOULD I FEED MY PUPPY?

Puppies should have 50 calories per day per pound of body weight.

You shouldn’t feed your puppy adult food because it lacks certain nutrients your puppy needs for its growth. To meet their unique nutritional needs, feed them up to four times a day. You should also be aware of the weight of your pup because this helps determine just how much food they should be getting each day.

To get more tips on feeding your chihuahua, read this
Tips for Feeding Your Chihuahua

HOW LONG DOES A PUPPY SLEEP

Puppies sleep between 16 and 20 hours a day.

Puppies also often wake every few hours for about an hour before they go right back to sleep. To help establish a good sleeping schedule, set a routine. Before it is time for bed, offer them their final snack, give them just a few more minutes of playtime, and allow them to go outside to the bathroom one last time. You can then offer them their favorite toy as you persuade them to go to their bed or crate. 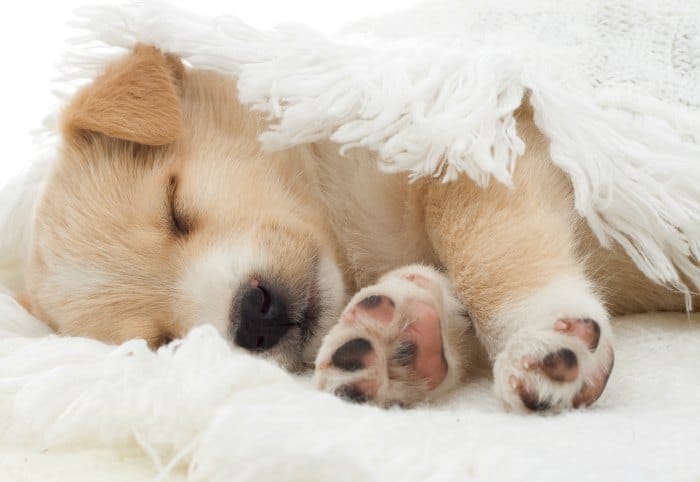 WHEN WILL MY PUPPY SLEEP THROUGH THE NIGHT?

Usually, by four months, puppies should be able to sleep through the night.

But if there is an upset in their routine (if you just adopted him, if you are traveling overnight, etc.), it may take longer.

Establish a bedtime routine for her and be sure to take her out to potty before bed. She may need to be let out again for another potty break sometime through the night.

WHEN WILL MY PUPPY STOP GROWING?

Most dogs are full-grown by the time they are a year old though they will fill out some more within the next year.

A few puppies will grow a little more and stop at 18 months old.

A Chihuahua puppy’s growth will usually begin slowing down between 12 weeks of age and six months. They will be very close to their fully grown size by this time. However, they are not considered fully grown adults until they are at least one year old.

IS IT NORMAL FOR MY PUPPY TO HAVE A SOFT SPOT ON HIS HEAD?

Yes, it is. It’s called a Molera, and in most cases, it will close up on its own by the time the puppy is a year old. In some cases, though, the Molera never closes up.

WHEN SHOULD I START POTTY TRAINING MY PUPPY? 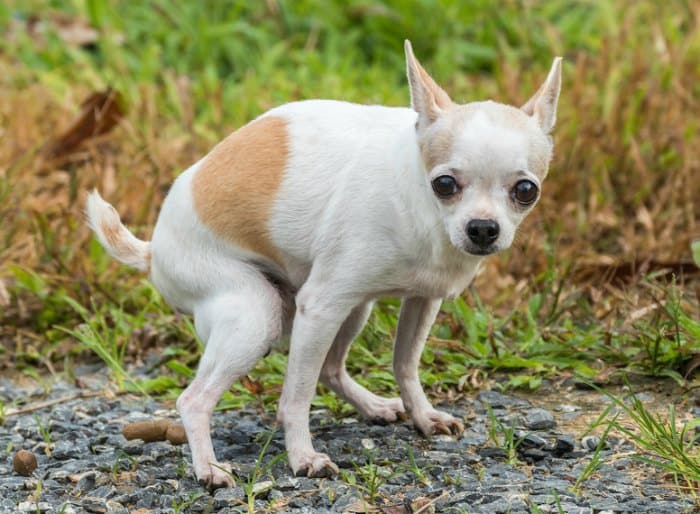 You should start house training as soon as you get your puppy.

It’s a long process, so be consistent and have patience. When potty training your dog, take your Chihuahua puppy out very frequently – about every two hours or so. They should also be taken out right away in the morning, during and after playtime, and after they eat and drink.

Pick out a nice bathroom spot in the yard and guide your Chihuahua puppy to that spot every time. Once done, reward them for their good behavior.

WHEN WILL MY PUPPY STOP TEETHING? 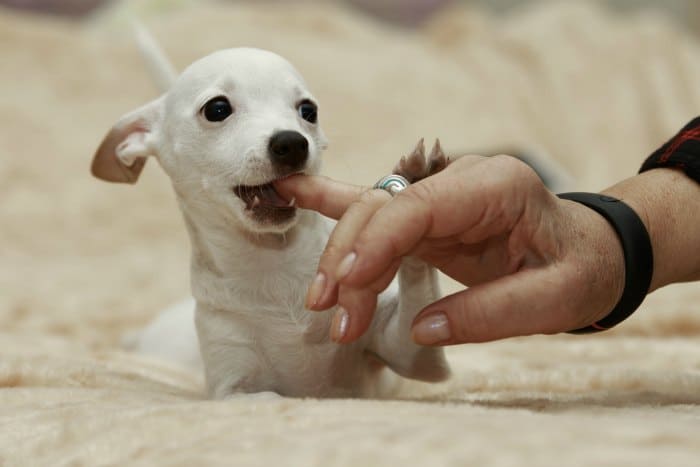 Puppies tend to like to chew for most of their first year.

When the baby teeth start falling out at around four months old, the urge to chew on everything will increase. The adult teeth should all be in by eight months of age when the urge to chew starts to decrease.

Of course, most dogs of every age do like to chew, so be sure to have some chew toys around for them.

Did you know puppies have 28 baby teeth and adult dogs have 42? Good dental cleaning and checks are important for helping to maintain the health of your Chihuahua. Their teeth should be brushed regularly to avoid infection and tooth decay.

WHEN SHOULD I SOCIALIZE MY PUPPY? 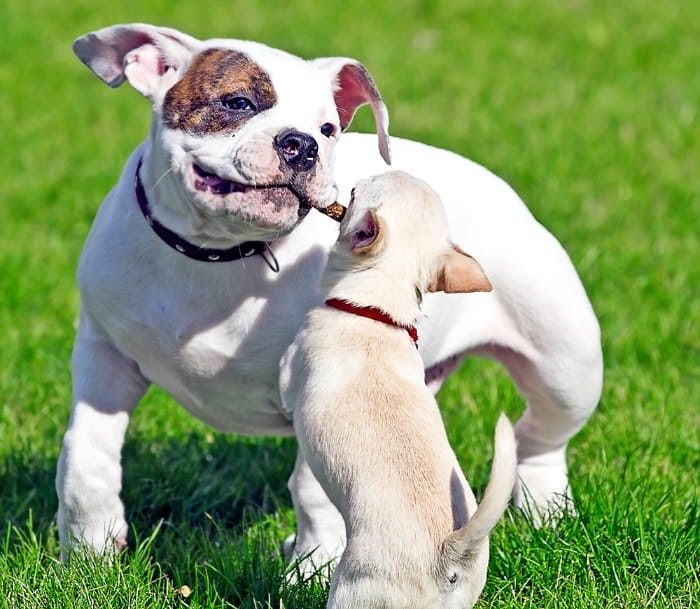 You should start introducing your puppy to humans and other dogs, cats, and other species if they will be around them, pretty much as soon as you get your puppy.

Do let him settle in first for a day or two.

But the earlier, the better. Always supervise your puppy when he’s around other animals and children.

WHAT ARE THE UNIQUE QUALITIES OF THE CHIHUAHUA DOG BREED?

When you have a tiny breed dog like a Chihuahua, they are going to have very unique and individual needs that will have to be met for them to remain happy and healthy in their new home.

Chihuahua puppies are a tiny breed dog but are very confident. They absolutely love to give and receive attention. Despite their small stature, this small dog grows up to be very bold. Their wide eyes and big ears are just two of their distinctive features in addition to their small size. The ears usually remain erect and are often quite large when compared to the rest of their head and body.

A newborn Chihuahua pup won’t open its eyes for a few days and will live off the mother’s milk and get a lot of sleep. Chihuahua puppies can be adopted out as soon as three months after they are born. However, a dog breeder may want to keep the puppies with their mother until they are at least six months old.

Chihuahuas are smart dogs, and as long as you are consistent with your training and you are patient with your new Chihuahua pup, your puppy will learn what is expected of him and will soon adapt to his surroundings.

Also remember, each Chihuahua pup will have its own personality. Some may be more laid back while others may be full of energy. They can also be very stubborn, but they are protective and territorial.

It will take some time to see where your newborn Chihuahua pup falls in the behavior and personality category, but once you learn more about each other, you can both create an environment that is suitable for the entire family.

Okay, that’s it. If you have any questions, leave it in the comments.

Also, we have another article with even more Chihuahua facts. 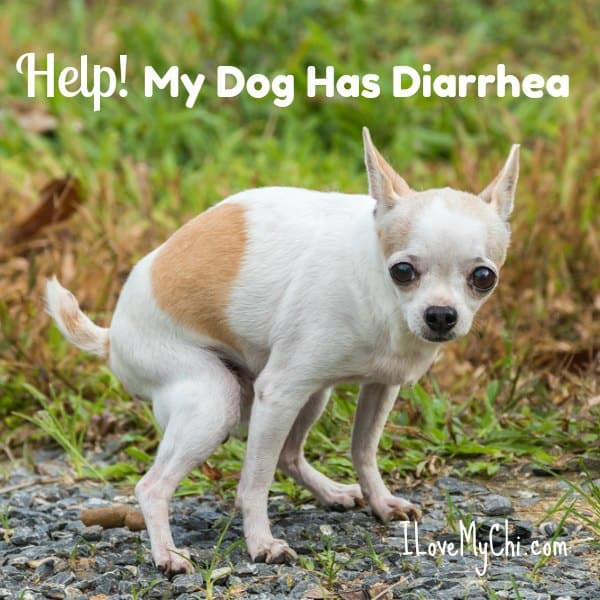 Previous
Help! My Dog Has Diarrhea 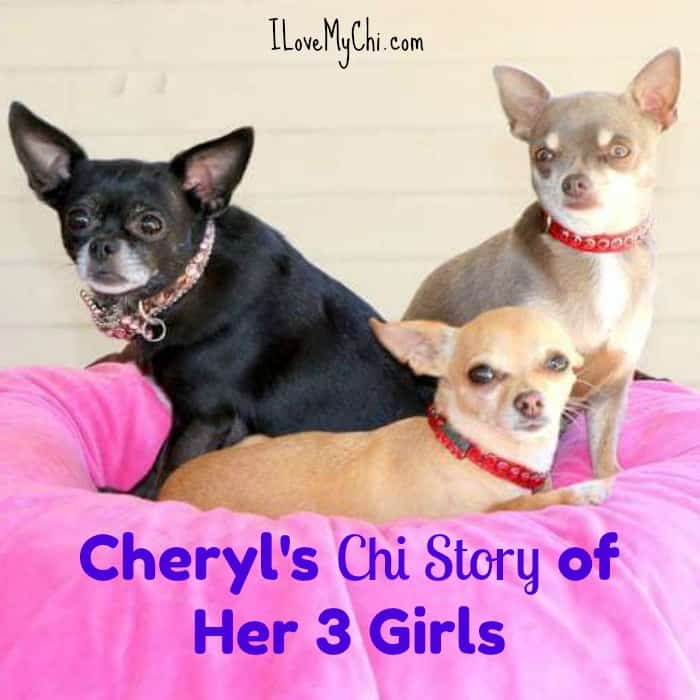 Next
Cheryl's Chi Story of Her 3 Girls
Click here to cancel reply.

My Chi is nearly 8 months old. Her ears are still floppy but she is very cute. I don’t know how to add a pic either?

I had to remove the plugin that allowed readers to add their own photos. It broke my site. Sorry Oriel.

trying to read everything I can about teacup chis..in July my sister is bringing me my pup..was going to include a pix but couldn't figure out how to do it

You can email the photo Karen, specially if you would like for it to be chi of the day on Facebook or chi of the week in our newsletter (just let me know which you prefer). Email to cathy@ilovemychi.com

I am having a home visit from for adoption of chihuahua/min/pincher 11 week old puppy please advice for what to buy asap...this is my first pup and I am retired. vet strongly believe crate train

Here's a post on what you need for a puppy: https://ilovemychi.com/what-you-need-for-a-chihuahua-puppy/ A few of the things you can wait until after you get the puppy such as a harness (you can take the pup with you to the pet store to make sure you have the right size). And if you don't know what kind of food the puppy is eating, I'd hold off on that until you know.

My 3½ yr old chi has recently had a beautiful litter of puppies. We are so pleased that although she had 7 puppies, we were able to bring up 6 of them (sadly losing one in the first 1½ hours ), 5 have been rehomed and 1, the smallest is staying here with her mum. She really is a tiny pup and still only just weighs 1kg at 16 weeks old.

I've been reading your page on and off since my chi was a pup. Now I hope the owners of the puppys will also check you out too.

What an adorable photo! Such cute chis. Glad you got to keep one of them and thank you for recommending this site to the new puppies’ owners.