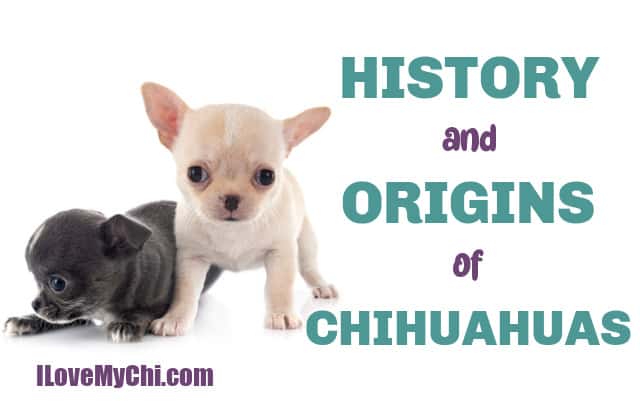 Many people wonder, “Are Chihuahuas Mexican?” The history of Chihuahuas dates back to ancient Mexico and it’s fascinating to learn how this loveable breed has evolved over the years.

Chihuahuas are one of the most popular canine breeds around and no wonder. They are loyal, adorable, and have loads of personality.

Chihuahuas can be seen in many parts of the world being walked by their owners, or carried in tiny dog purses decked out in rhinestones. Chihuahua owners love to dress up their pooches in tiny clothes made especially for them, and celebrities can be seen toting them around Hollywood, even on the red carpet.

But what did the Chihuahua evolve from?

Check out our comprehensive post that showcases all our Chihuahua facts articles!

The Chihuahua breed originated in ancient Mexico and is considered one of the oldest breeds of canines in Mexico. Most people believe the chihuahua dog origin dates back to Mayan times when Chis descended from the Techichi.

Techichis were a Mayan breed of dogs that were described as being extremely tiny.

Techichis have been depicted in Mayan, Aztec, and Toltec writings and drawings found in ancient tombs and pyramids.

In 1850, Techichi dogs were found in the Mexican state of Chihuahua near old ruins built by Emperor Montezuma. When explorers came searching for the new world, it is believed that the Techichi bred with a canine species brought over by the explorers. This resulted in the Chihuahua we have today.

Why Were Chihuahuas Bred?

Since most dogs are bred for a specific purpose, people often wonder, what are chihuahuas bred for?

Chihuahuas were bred as companions and as sacred animals. Evidence suggests that these dogs were popular as sacrifices for religious ceremonies and rituals.

The Aztecs and Toltecs may have believed that these small dogs guided the soul to the underworld after death and the Techichi dogs were often buried with their owners.

History of Chihuahuas In America

The first Chihuahua was registered by the American Kennel Club in 1904 and was named Midget.

Chihuahuas’ popularity in the United States was slow during the early 1900s. Most people lived on farms and wanted dogs that could serve a purpose. Folks opted for dogs that could herd livestock, chase off varmints, scare off predators, or be used in hunting.

Because of their small size, Chis were considered useless on the farm.

One of the myths going around back in the day was that having a Chihuahua sleep next to a person in their bed would transfer their illness (usually asthma or other lung diseases) from the human to the dog.

One of our readers told about how her uncle did this and it actually worked, but killed the poor Chihuahua. Glad we don’t use Chihuahuas in that way anymore!

During the 1960s, the population in cities started to boom and many people were living in small apartments or houses. Because of this trend, people were now wanting a smaller dog that was suitable for household living and companionship.

The smallness of the Chihuahua breed pertained well to city folks, so the popularity of Chis started to rise.

Chihuahuas were first popular in the states that border Mexico, such as Arizona, Texas, and New Mexico. Eventually, the Chihuahua breed spread to other cities all over the United States, and even in other countries.

Ever notice how Chihuahuas sort of resembles a fox? There is a reason for that. It has long been thought that Fennec foxes were bred with the early Chihuahua ancestors.

Is it possible that the chihuahua dog history includes breeding with foxes? The argument against it was that a dog and a fox cannot interbreed, but that argument was put to rest in 1980 when a Chihuahua and a Fennec fox were successfully bred.

Characteristics of the Chihuahua

Aside from the interesting Chihuahua origin, these dogs have many wonderful characteristics.

FAQs About the History of Chihuahuas

How long have chihuahuas been around?

Chihuahuas have been around since about the 9th century. They are the oldest dog breed on the American continent.

Why are they called chihuahuas?

Chihuahuas got their name from the region of Mexico they came from, which is the state called Chihuahua, Mexico.

What country are chihuahuas from?

Chihuahuas are from the country of Mexico.

Why were chihuahuas bred?

No one knows for sure what Chihuahuas were originally bred for but historians believe it may have been for several things such as food, companionship, and for religious reasons.

I’m an avid dog lover and I’ve had many dogs throughout my life. When I rescued my first Chihuahua, I was hooked on the breed.

I have had dogs all my life and have trained as a dog groomer. I also have been a kennel worker, worked in a pet hotel through PetSmart, and still am a pet sitter.

Read my full bio on my About page

Hello Cathy, great to hear that your first treatment went so well and sweet little Lucy putting her little paw up to say all is well. Try to have plenty of rest and pure water to drink. This is a very interesting newsletter and confirms that I always thought the Fennec Fox is in the Chihuahua gene pool. I had also heard that the ancient Chinese bred the Chihuahua as the Fennec fox lives in a desert within China's reach. The Chinese also bred other toy breeds to comfort the Emperors and the Chinese immigrants brought the chi, to Mexico during the gold rush. We are curious beings and it great to get this article from you, to think about. God Bless you to full recovery.X

As usual, I see that Miss Lilly is still as beautiful as ever. I have always thought she was a stunning little girl.......!!

OMG, Butter was such a lovely furbaby and so sorry for your loss, however 20 years gave you and Butter a nice long life together. So sorry for your loss. I feel that pain since I have had 2 loses and it hurts to the quick of our bones and nothing can ease that pain but a lot of time can dim it a bit.

Why do my chi’s always stare at me and me only there are two other persons in the room but only stares at me.

Most likely because you are their favorite human. Dogs stare for 2 reasons: either they love you or are challenging you.

I have two Dachshunds besides Ruby my Chihuahua . Kramer and Amber Rose. This is to answer your question above

Doxies are awesome! I love the names you gave all 3 too.