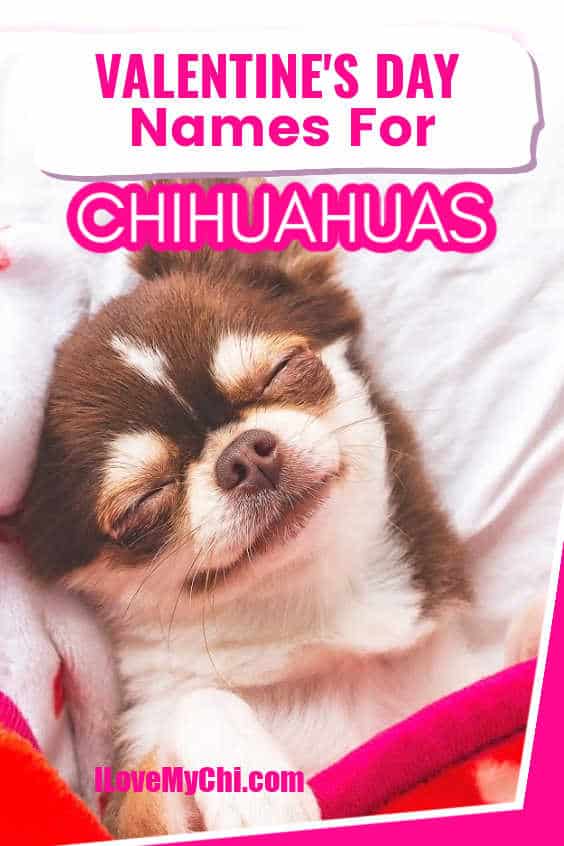 If you adopted a chihuahua on Valentines Day or it’s your favorite holiday, you may be looking for Valentine’s day names for chihuahuas.  We have several chihuahua names posts but this one is solely dedicated finding the perfect Valentine names for your chihuahua.

Allie, after the female lead in the romantic movie “The Notebook”, watched by many couples on Valentines Day dates.

August, Auggie or Augustine, a perfect name for hopeless romantics, this name is inspired by St. Augustine. He wrote “Faith in Invisible Things”, wherein he states that someone does not have to be with us for us to love them.

Birdie, because in poet Geoffrey Chaucer’s poem said to have inspired Valentine’s Day, “Parliament of Foules,” he declares that birds and humans seek their mates on the 14th of February. Further, some species of birds begin mating in February.

Candy or Candi, a popular gift on Valentine’s Day.

Charles, after Charles, the Duke of Orleans, who is the author of the oldest Valentine that is known of today.

Claude or Claudis, after the Emperor Claudius II who outlawed marriage for young soldiers because he thought single men would be better soldiers than married men. St. Valentine married couples in secret during this time, which resulted in the emperor ordering his death on the 14th of February.

Cadbury, Cocoa or Hershey, because chocolate is often exchanged on Valentines Day.

Casanova, this one is kind of funny.

Cupid, after the mythical Greek figure of love.

Eros, the mythical Greek god of love. Eros is the inspiration behind the cupid of today associated with Valentines Day.

Esther or Howie, after Esther A. Howland, the first person to make and sell Valentines in the United States in the 1840s. She is known as “the mother of the valentine”. 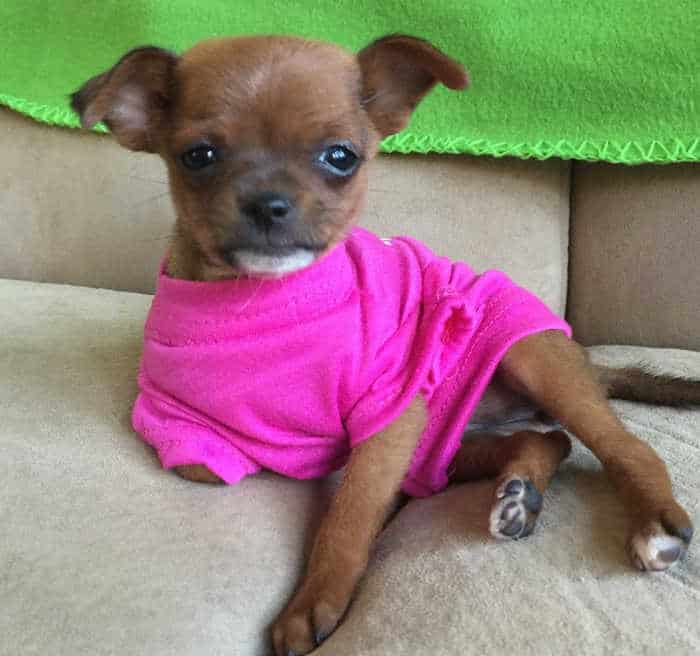 Geoffrey or Chaucer, after Geoffrey Chaucer, the English poet who was the first to record Valentine’s Day as a romantic day in a poem.

Gift, because gifts are exchanged on Valentine’s Day and the unconditional love of a dog is true gift that you receive everyday you have with your dog.

Hero, because many historical figures associated with Valentines Day are considered heroes because of stories of secret weddings, healings, and martyrs helping Christians escape difficult conditions and persecution.

Jane or Tom, after the characters in the movie “Becoming Jane” about the life of famous romance writer Jane Austen, often watched on Valentines Day dates.

Lacey, because Valentines were often made using scraps of lace in the 1800s.

London, after the Tower of London, where Charles the Duke of Orleans was imprisoned when he penned the Valentine to his wife that made history as the oldest Valentine known of today.

Love Bug, Bug for short, because Chihuahuas love snuggling in blankets, making them “snug as a bug in a rug”. Chihuahuas are very loving creatures in general too, making Love Bug a perfect Chihuahua name.

Lupe, after the Roman festival Lupercalia, which was a festival of fertility and match making, which our modern version of Valentines Day eventually replaced.

Mystery or Enigma, because there are so many stories of the origins of Valentines Day that the holiday’s true origins are a mystery. 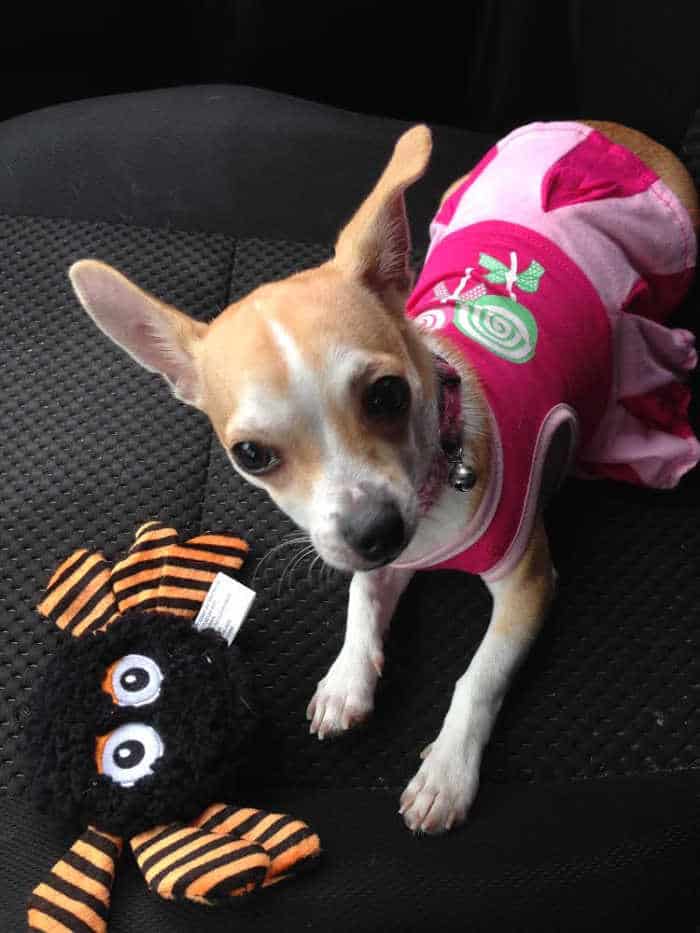 Noah, after the handsome and passionate protagonist in the romantic movie “The Notebook”.

Ophelia, a character in Shakespeare’s “Hamlet”, who refers to herself as Hamet’s Valentine.

Roman or Roma, because Valentine’s Day has roots in Rome.

Romeo or Juliet, after the leading characters in one of the most famous love stories in history.

Rose or Rosie, after the most popular flower gifted on Valentine’s Day or on anniversaries.

Snuggles, One of our readers named her dog Snuggles and then the name morphed into Nugga-Bunny. That’s such a cute name.

Valentino or Valentina, after Valentine’s Day itself. 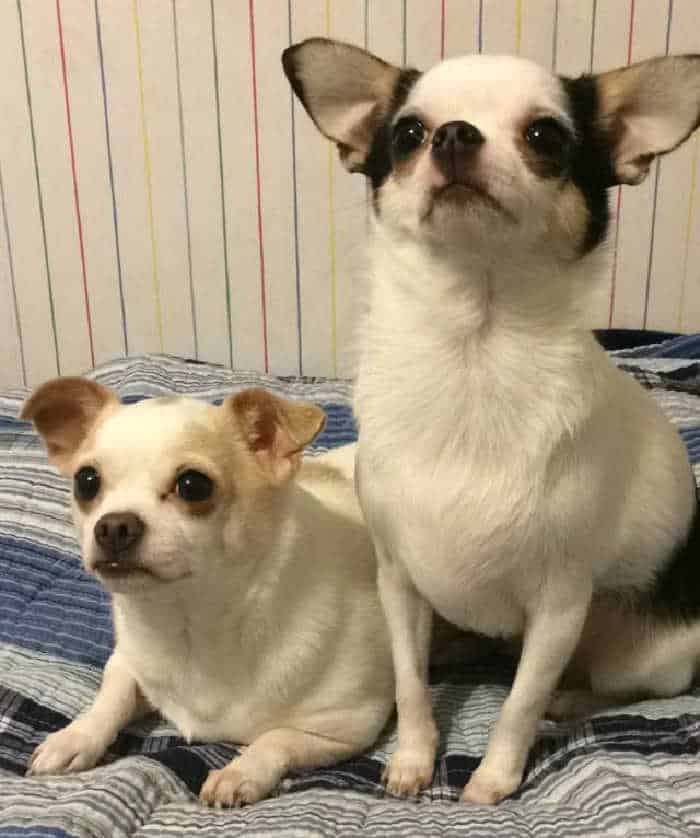 Does your Chihuahua have a Valentines Day or love inspired name? Or do you know of one not listed here? Share in the comments below to help other pet parents choose their furry friend’s name.

I nicknamed her Rose

Arctic is my little gals name after a character in a book my grandson was reading plus she is white. She has a brown fur heart on her back, brown eats, face mask and brown ring at the base of her tail. I think she meets the Valentine Day criteria !

I got my (now passed) Chihuahua named Nugga-Bunny 3 days before Valentine's Day in 2007. She started out Snuggles.. and it morphed into Nuggles or Nugga, then Nugga-Bunny. We miss her bunches. I do have another Valentine baby, a Chocolate Pomeranian named Tedd E Bear. He was born ON Valentine's Day in 2018!! (I would add pics but don't know how to here.)