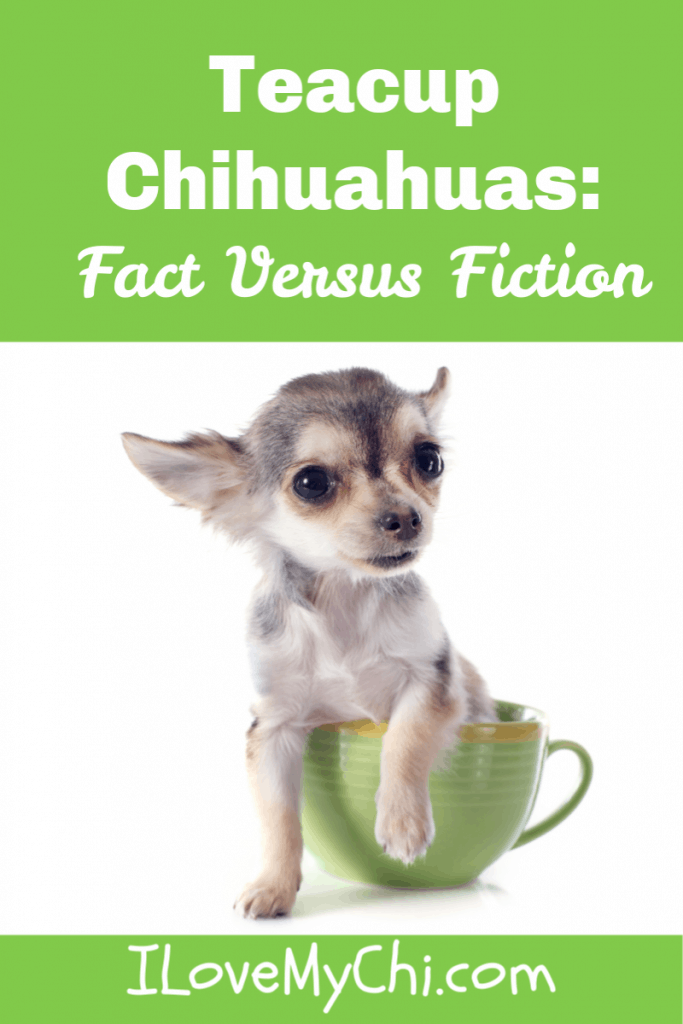 Teacup chihuahuas are known for their small size and often look like puppies their whole life! Considering adopting a dog? Read these 10 things you should know about teacup chihuahuas.

We’ll break down the myths around this classification of Chihuahua so that you can weigh all of the pros and cons before you find a teacup chihuahua for sale.

Chihuahua owners love all things small, and no dog is smaller than a teacup chihuahua. They are sometimes referred to as micro chihuahuas or mini chihuahuas!

These special dogs often look like puppies their entire lives, and some teacup chihuahuas may never grow larger than the palm of your hand.

Teacup chihuahuas do unfortunately suffer more health problems than standard chihuahuas due to their size. They also have shorter lifespans.

What Is a Teacup Chihuahua?

When a chihuahua dog has puppies, she normally has a runt in the litter. Runts are smaller than their brothers and sisters; they may never look fully grown.

A miniature chihuahua is also more prone to health issues when compared to its bigger siblings, so the chihuahua lifespan may vary between types.

The Chihuahua Club of America condemns “teacup” as a misnomer. They find the term misleading, and they worry that it could trick unsuspecting buyers into spending more money than necessary.

Let’s take a closer look at some teacup chihuahua facts and other information to help you decide if this kind of chihuahua breed puppy would make a good addition to your family.

How Big Do Teacup Chihuahuas Get?

Some teacup chihuahuas may actually fit inside a teacup. Others may not. Because “teacup” isn’t a recognized classification of chihuahua, its definition is up to the breeder or owner.

Some full grown teacup chihuahuas indeed look like miniature chihuahuas for their entire lives. Chihuahuas are full-grown by eight months to a year old. If your chi is a tiny dog on its birthday, it won’t be getting any bigger.

You can generally expect an adult teacup chihuahua to weigh less than four pounds. They may never grow taller than six inches in height.

Height and weight benchmarks are subjective, though, so you may meet a teacup chihuahua that doesn’t fit this description.

Are They Prone To Health Issues?

They are prone to many health issues for such a tiny dog. In fact, their miniature size is exactly what predisposes them to so many health problems.

Standard chis are at risk for several health conditions because of their small stature. Their tiny frames are delicate and easily injured.

When you breed two runts together to make a teacup, you multiply the number of potential health risks.

Bone fractures are common in teacup chihuahuas. Teacup dogs of all breeds have increased rates of heart disease. Tiny bladders and tiny tummies predispose teacups to incontinence and hypoglycemia.

Other health problems they face include:

How Long Do Teacup Chihuahuas Live?

Standard chihuahuas have an average lifespan of twelve to twenty years. Some may live to be over 20 years old.

Unfortunately, the smaller the dog, the more likely it will have a shorter lifespan than average. Their tiny frames aren’t made to support long lives.

If the chi is the result of two runts, the teacup chihuahua lifespan could be even shorter.

The Chihuahua Club of America warns they may need extra care to live long, healthy lives. Their health issues should be kept in check with regular vet visits.

Characteristics of a Mini Chihuahua

A teacup chihuahua can have either short or long hair. Even though these dogs are much smaller in size compared to other small dog breeds, they are still full of the same confidence and energy as larger chihuahua dogs that are full-sized.

Guinness World Records gave the title of smallest living dog to a female chihuahua back in 2013. She was only 3.8 inches tall and weighed less than an ounce at birth.

Instead of fitting into a teacup, she surprisingly fit into a teaspoon! She was often labeled “teaspoon chihuahua”.

Should You Adopt a Teacup Chihuahua?

The decision to adopt a pup is yours alone to make. Everyone wishes their dog could stay a puppy forever, and teacup chihuahua owners get to live that dream.

However, they do come at a price. Health issues can stack up quickly.

That said, any owner would tell you that they love their fur-baby with all of their heart. If you own a teacup chihuahua, you know how special he or she is to you.

Still on the fence about getting a teacup chihuahua? Let’s break down a few reasons below to help you decide.

They Are a Royal And Loyal Dog Breed

They have unique personalities and run the gamut between quirky and energetic to goofy and diva-like.

No matter what, they are usually very affectionate with their owners. They love to snuggle up and create a strong bond with their family. They are extremely loyal and grow very attached to their owner.

Just like other types of chihuahua, the teacup variety is still just as lively and as excitable despite their very tiny size.

To make up for their small stature, they do tend to bark a lot and very loudly, but a little training early on can help curb this habit.

Chihuahuas Are Courageous And Protective

Even though they are known as a miniature version of the world’s smallest dog, teacup chihuahuas are very courageous and are great protectors.

Their barking will warn you of any danger there may be, and they are very alert.

What Is The Difference Between a Teacup Chihuahua And a Standard Chihuahua?

A teacup is a very small dog breed even when compared to a standard chihuahua. For this reason, they aren’t the ideal dog for every family.

They are known to have much shorter tempers and may end up being more aggressive than standard chihuahuas.

Their care also requires much more time and effort on the part of the owner, which includes more responsibility because of their smaller size.

If you’re interested in more chihuahua facts, check out our main post that showcases them all!
Be sure to also check out these adorable sweaters that will fit tiny chihuahuas.

Hello I’m considering adopting a tea cup chihuahua I have had 2 wonderful chihuahuas who lived happily and healthily and much loved I am concerned that should I take on a companion that at 64 years of age myself this would be a good idea considering the longevity of my previous chihuahuas and my own age any advice would be much appreciated. Kind Regards Ann Fox

Do you have anyone who could be the "godmother " or "godfather"? I'm close to your age and when I got my dogs, I found friends and family who agreed to take my dog(s) if I passed before they did. Also teacups typically don't live as long as normal sized chihuahuas

Love the photo of your 4 fur babies, they look so contented and keeping warm inside your cosy chair. The article on tea cup chis is the best I have read. All the best to you Cathy, you are one of life's caring people.

My mama chi had 3 babies at 3 oz each. For 2 weeks they all grew at the same rate then Bella stopped gaining weight at the same rate as her brother and sister. She is 9 years old now and weighs 3 pounds.. She is healthy, jumps on and off the furniture better than my larger chis. She skips meals when she is not hungry but will eat as much as my other chis that weigh from 5 - 8 pounds. I have been very lucky with all 6 of my fur babies.

@Tammy, Sorry about your baby I have a teacup chi she is 3 pounds And 13 years old thankfully no health issues brush her teeth every night vet says best chihuahua teeth ever as she has all 42 teeth She goes everywhere with me she know the word downlow and hides in bag in fine restaurants and grocery stores every one loves her especially children she is so sweet never barks or snaps likes to dress up and get attention

Chis are the best

@Jacqui, My Baby is a chi and Feist mix and she only weighs 3.5 pounds about 7 inches tall and she has definitely been a sick baby. She is 6 years old and has been hospitalized several times 😢. I had no idea she would be this tiny when I adopted her. love her dearly but she has had some big vet bills.

Yes you have been very lucky Jacqui!

I have 2 Chi’s Hugo & Pedro. Both very small and very adorable. Hugo is 1.7lbs Pedro 3.4lbs. I didn’t think there was any such thing as a teacup Chi, I thought they were just the runts. My Chi’s are very healthy though, I’m thankful to say. I don’t think I would ever have another dog breed, they both go everywhere with me.

You are very lucky Lisa that your babies are healthy being as tiny as they are. I bet they are adorable!

I got my teacup chihuahua from an AKC breeder and he was the sickest puppy I’ve ever had. He had dysbiosis where he had diarrhea so severe he almost died, even after fecal transplants. We pulled him through that at the cost of $ 12,000 and then the mange showed up. I have better success finding healthy chihuahuas on Craigslist for a 5 th of the price. Sometimes the saying that you get what you pay for backfires.

Oh my gosh though, he's so cute! As much as I love how cute and tiny "teacup" chis are, I'd be afraid to have one because of all of the health problems they tend to have.